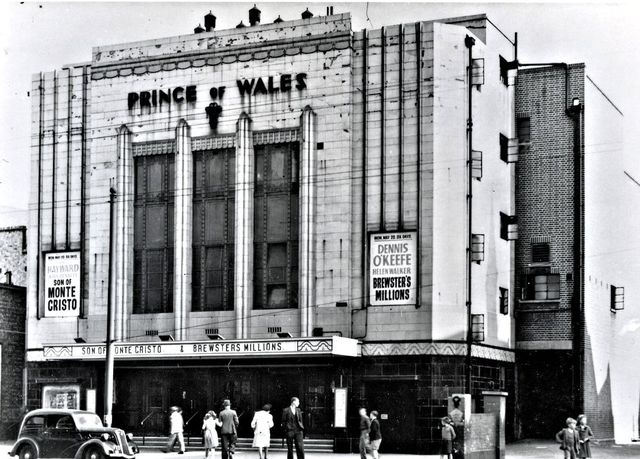 Located in the inner-city west London district of Westbourne Park area of Paddington. The Prince of Wales' Cinema was built on the site of an earlier Prince of Wales' Picture Playhouse (1912-1934) which had 650 seats and was designed by architect M. Wilson. The new cinema was built for W.C. Dawes' Modern Cinemas circuit, a small independent chain of cinemas in west London.

It opened on 27th October 1934 with Tom Walls in “A Cup of Kindness” and George Arliss in “The House of Rothschild”. Architects J. Stanley Beard and W.R. Bennett designed a pleasing Art Deco style cinema which was equipped for cine/variety programmes. The facade of the building was clad in cream faiance tiles and had three large windows in the centre which let in light to the large foyer. Seating was provided in stalls and balcony levels and the auditorium was illuminated by indirect lighting.

It was taken over by John Maxwell’s Associated British Cinemas (ABC) chain from 19th February 1935 and they continued to operate it throughout its uneventful life. It was closed on 23rd November 1968 with the off circuit programme; Terry Jenkins in “Bandidos” and Tetsuro Tamba in “The Assassination” (“Ansatsu”).

It was converted into a Mecca Bingo Club from 1970 which continued for many years, latterly operated by the independent Jasmine Bingo Club chain. It closed in September 1996 when Jasmine went bankrupt and all their assets were frozen. The Prince of Wales' was sold to property developers and was demolished in August 1997, housing was built on the site.

The Prince Of Wales was my nearest local cinema when I was growing up in the early 1950’s and remember the picture house well.

To add to the information that Ken Roe has provided, I well remember, that when the cinema had the “House Full” signs up, the establishment allowed a certain number of patrons to stand on either side of the stalls on a raised gangway, separated from the seating, by a wall (about chest height) from where you could view the film. Basically, you formed a single file queue, with an usherette standing at the screen end, who then showed you to a seat should one become available.

I do not know whether any other cinema had this facility, perhaps someone could advise?

A lasting memory for me from my teens was the showing of “Bill Haley and the Comets' in "Rock Around The Clock”. Some got up to dance and before you knew it the place was a dance hall and every space was utilised; including the 2 raised aisles either side (referred to by Peter Dean' previous comment) the side aisles were only wide enough for about 4 people at a squeeze. The Prince of Wales and the Odeon, Kensal Rise were my cinemas of choice. I’ve lived in Australia since 1969 but the memories of youth stay with me.

Oh yes, I remember it well, I always remember after the Saturday morning minors coming out and turning left to go home, there was a small kiosk selling cigarettes and next door was an angling shop selling all kinds of fishing gear, the police station was the other side of the cimema, Bradley and Perrings was the nearby dept store, and round the corner in Westbourne park rd was another cinema, near the canel bridge, (carlton bridge), spent many a time fishing there…it was easy to cross the road in those days….somehow a happier time me thinks.