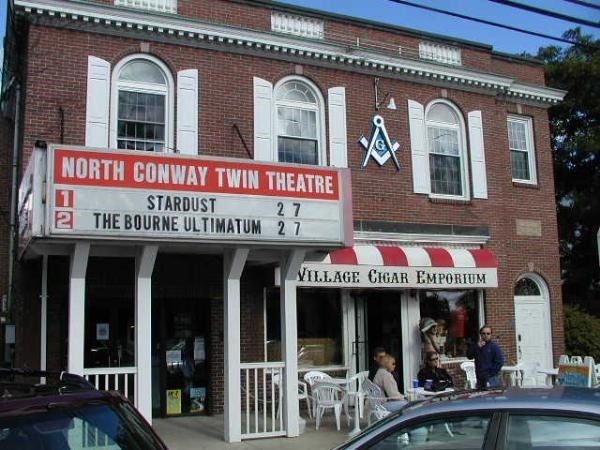 The North Conway Theatre was opened in the Masonic Building in 1930. It was a single screen. It has since been sub-divided into two screens. It was closed in 2011.

Listed in Film Daily Yearbooks from at least 1941 as the North Conway Theater with a seating capacity given as 760.

The Masonic symbol seen on the building in the photos Lost Memory linked to above show that theater and temple still shared a building long after the fire. The building looks fairly old (though New Englanders have long had a habit of building new buildings in the colonial revival style) so my guess would be that it’s the building that burned in 1930 and it was repaired. I have no idea how long the Masonic Theatre had operated before the 1930 fire, but the name North Conway Theatre definitely dates from 1930.

When i biked by last week, i saw the Masonic symbol and there were the last movies on the marquee. i’ll have to check my camera.

the marquee pic on this googlemaps image is from ‘08 i believe. that was a pacino film.

The theatre has been closed for years. Known mostly as the North Conway Twin Theatre, or just the Twin.The Masonic Lodge was, and still is, active. They own the building, and the theatre space was rented. When they closed the theatre, the inside was stripped. Seats and everything were hauled out. The Masons use it as storage now, as near as you can tell from looking inside. This theatre and the one located 2 miles south inside the Mall were owned by the same company, run by Boston Concessions Group for many years, DBA North Conway Cinema Limited Partnership. It’s a shame, really, this one had to go. I worked here for almost 15 years, and grew up in it’s auditoriums watching thousands of movies, as I had family who worked here since the late 80s. The marquee fell several years ago, and the white posts and small fence that are seen in the image above were added at that time. The sign is grandfathered, so they didn’t want to remove it.

I found information on the life of Leon Bolduc, who was active in the development of Conway, NH, that he opened the North Conway Theatre in the Masonic building in 1930.