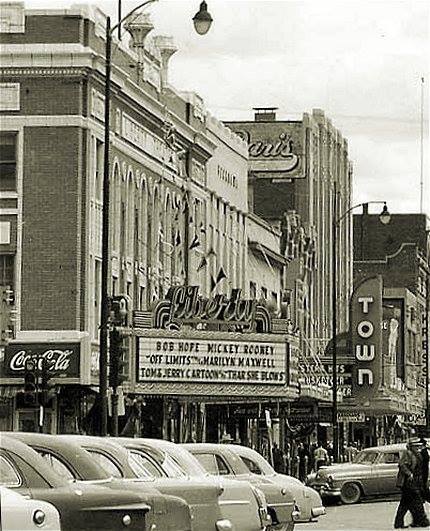 The Liberty Theatre was opened August 23, 1921 with “Nomads of the North”. It was equipped with Hope-Jones Wurlitzer unit organ. It was taken over by Carisch Theatres in July 1975.

This web page mentions in passing (in the caption to a photo of the city’s former Pantages Theater) that the Liberty Theatre in Great Falls was converted to office and retail space in 1978.

Another website has more information about Great Falls' Pantages Theater, which is currently unlisted at Cinema Treasures.

This Theater is stylistically similar to Seattle’s Liberty Theatre (1916). The theatre was managed by Jensen and Von Herberg, who also hired Ryan to design Butte’s Rialto Theatre.

Unfortunately the Public Drug Building, site of the vanished Pantages Theater, was seriously gutted by fire in the latter part of 2010 or early part of 2011. Structural assessment has been done and it appears that a rebuilding of the interior is planned—odd that the Set Free Ministry site doesn’t seem to mention it unless I missed something. The noted Public Drug was relocated shortly after the fire.

The Goggle pin is off by a mile (literally) at least and on the wrong side of the Missouri River. Just updated the picture. D. A. Davidson convinced the city of Great Falls to close one block of the street between their building and the Liberty Theater— a plaza/park was installed and the two building were connected via a pedestrian conduit.

Dallasmovietheatres, you must be talking about another Liberty theatre elsewhere. It opened on August 23rd, 1921. Have a look at this newspaper clip.

This theater can be seen in the Clint Eastwood Movie Thunderbolt and Lightfoot. Near the end of the movie George Kennedy drives by it twice before plowing into a department store window.