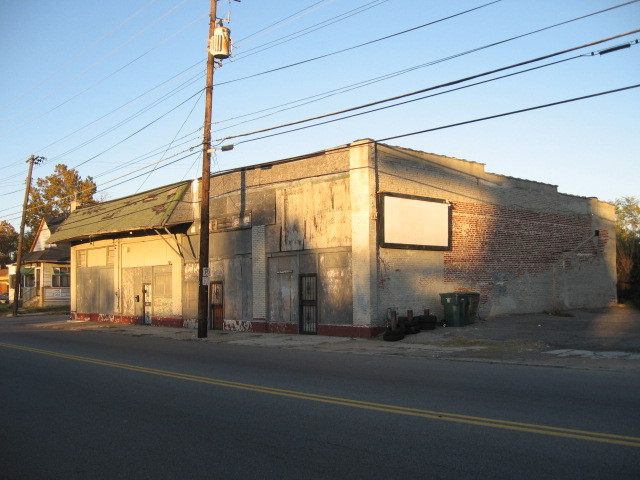 Opened in 1927 as the Gem Theatre. Dave Lebovitz and his brother owned and operated several ‘colored’ movie theatres: Ace Theatre, Harlem Theatre and Georgia Theatre. It was unique in that the street frontage was mostly commercial with a long central hallway. This hallway ended in a staircase as the auditorium was on a small rise behind the commercial building.

The Harlem Theatre closed in 1957. Located on Florida Street at Farrow Avenue, since closing the building has been demolished and the corner section of the commercial space is all that remains today..

Years ago I walked this site because I had seen the theatre mentioned in the city directories and was curious if it still stood. I had been researching pre-sound era theatres so I believe that it was standing before 1927.

The theatre was built as part of a retail development with two shops to the right and two shops to the left of the theatre entrance. Each shop bore the same name, but it wasn’t “Harlem.” I believe that each was a “Gem:” Gem Theatre, Gem Barber Shop, Gem Dairy Bar, Gem Hats, etc. However, after 20 years I can neither tell you with 100% certainty if the name was actually Gem or not, nor exactly what the stores sold.

About 1987 I did go down to Florida Street (not exactly the best part of town) and walked the area. The theatre and shops were of red brick and but a single story tall at street level. The shops were all vacant and the theatre’s marquee was gone. The theatre’s poster cases still hung on the walls – so I knew I was in the right place – their glass doors smashed away. The scar on the side walk where the free standing box office had once stood was clearly visible. Walking past the box office, there were no doors, it was a covered entrance open to the street with more poster cases on the side walls: not an uncommon design. What did make it unusual was that only a few feet beyond the box-office was a stairway the full width of the corridor. Ascending the stairs lead to a pair of chained doors, obviously the entrance into an orchestra foyer or standee area.

What a sad irony that the few Jim-Crow-era theatres that allowed blacks at all, forced them up long stairways to the top balconies. This theatre, which must have been built for an exclusively black audience, still had its patrons tramping up another long dark stairway.

I could see sunlight through the cracks between the doors.

I walked back down the steps, out to the street and around the corner onto Farrow and then up a rather short, steep hill. There I found the poured concrete floor slab of the auditorium, a good eight or ten feet above the level of the Florida Street entrance. The auditorium walls were long gone, substantial trees growing through the cracked and broken concrete floor, leaves too thick to discern any detail that might have been imprinted in the floor.

Looking back at the chained doors I had just left, it became obvious that the stairs had led patrons up to the orchestra level and onto a bridge over the alley which ran behind the store fronts. Memphis' much grander Loew’s State had a similar arrangement.

Of the auditorium, nothing taller the floor slab was still standing. The slab was obviously that of a theatre floor though: that unmistakable wide, half-bowl shape.

The satellite photos, available through the Google link above, seem to indicate that the lobby building still stands (though the pointer seems to be a little too low) and if you use your imagination, you can see still see the outline of the auditorium between the retail block and the apartments a half block beyond.

My dad and his brother owned and operated this theater from the time it opened until it closed, probably in the wake of the MLK assassination. It plus the Ace and the Georgia were all part of the orginal group which they owned and all were in black neighborhoods that could be pretty rough on weekends. It was always the Harlem theater from the time my dad owned it.

Doctor Phil: any photos? The Memphis Public Library would be really interested in anything you’d like to donate – old ledgers, photos, anything at all. Can you describe the interiors of any of those theatres? It’d be great to hear any details you can remember.

The above photo was taken in November, 2012. The passage to the theatre and anything on the upper level are gone, only the left hand storefronts remain. Dave Lebovitz owned and operated several “Colored” movie theaters: Ace, Harlem, and Georgia. He and his brother also owned and operated three Drive-in movies: Sky-Vue, Lamar, and Sunset (West Memphis).

City directories show that a theatre called the Gem opened at this address in 1926.