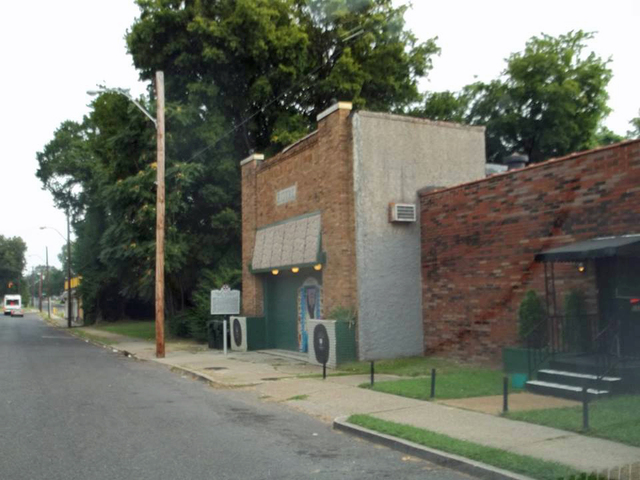 Located on South Lauderdale Street just south of East Trigg Avenue, the Shamrock Theatre was opened in 1915, and is an early surviving moving picture house building. In the early-1920’s, the Rex Theatre, an early open-air theatre or airdome, moved from McLemore Avenue to the Shamrock (Royal) building. When the Rex Theatre was converted to sound, it was renamed Royal Theatre and continued to serve as a neighbourhood theatre. The Royal Theatre was closed in 1955.

Two years later the building was let by Joe Coughi, son of a neighbourhood merchant. Coughi, a local musical entrepreneur, rented the building for 60 Dollars a month and with partners Quinton Claunch and John Novarese converted the Royal Theatre into the Royal Recording Studio, home of Hi Records. Soon after Hi Records inception in 1956, it became known as the ‘House of Instrumentals’.

Under Willie Mitchell, the musical direction of Hi changed significantly from rockabilly to R&B as Mitchell helped fashion the modern Memphis soul sound. Mitchell signed with Hi in 1963 as a session trumpeter. As a musician he had mild personal success.

After Hi president Joe Coughi’s death in 1969, Mitchell took on more production and administrative duties and soon his own recording career was eclipsed by his genius as producer of one of the most influential singers of the 1970’s, Al Green. In the early-1970’s, producer Mitchell pioneered a Memphis soul sound which scaled heights of elegant spirituality and musicianship as well as popularity.

For the next four years, Green & Mitchell had a Number 1 hit each year. This was more than Stax artists' Otis Redding, Sam & Dave, and Booker T & the MG’s achieved during their entire combined careers. The ethereal combination of Mitchell’s refined productions and Green’s spiritual vocal gymnastics paid off not only aesthetically but financially as well. In his career with Hi, Al Green would sell more than 20 million records.

Hi Records remains the last great success of Memphis soul music to be recognised world-wide, at least at current writing, and Al Green is one of the most popular and successful recording artists in Memphis music history since Elvis Presley. Among some others who recorded at the Royal Studios were Memphis Horns, Ann Peebles, Otis Clay, Syl Johnson and the Ike & Tina Turner Review.

Willie Mitchell’s Royal Studios is one of the oldest perpetually operated recording studios in the world, and continues to host gold and platinum selling artists such as John Mayer and Rod Stewart to name a few.

It seems to be freshly painted. The sign on the front says, “The Studio.”

The theater was converted into Hi/Royal Recording Studios in the late ‘50s. Among some of those who recorded here were the Memphis Horns and the Ike and Tina Turner Review, back when Memphis was the capitol of Soul.

http://www.jukenjamm.com/juke/photos/hi/hi.html
Here is a link to the studios' history that many will find of interest.

Willie Mitchell’s Royal Studios' official web site at http://www.williemitchell.com/index.php indicates that the theater was built in 1915 and converted into a recording studio in 1957.