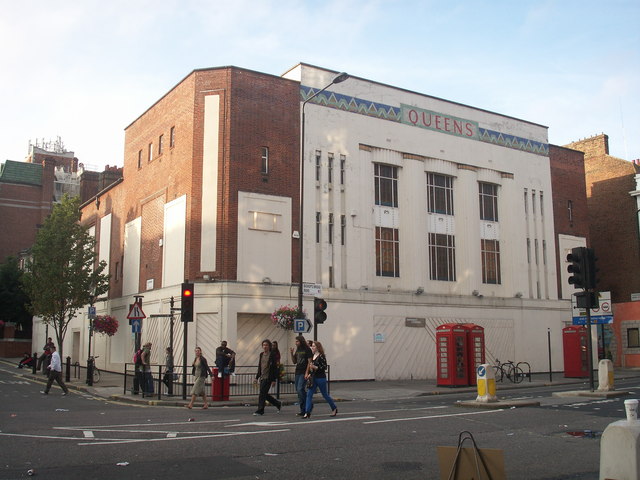 The Queens Cinema was built for and operated by W.C Dawes' Modern Cinemas, a small independent circuit which had cinemas in the west of London. It opened on 3rd October 1932 and architects J. Stanley Beard and Clare designed a pleasing cine/variety cinema for (what today is) the rather up-market area inner west London district of Bayswater. The main façade has a central feature over the entrance which is clad in white stone. Along the top of the building it has a zig-zag pattern and the name ‘Queens’ laid out in multi-coloured terrazzo. Seating in the auditorium was provided in stalls and balcony levels. The stage was 15feet deep and the proscenium opening was 40feet wide.

It was taken over by John Maxwell’s Associated British Cinemas (ABC) chain from 19th February 1935 and remained under the control of that circuit for almost all of its cinematic life. It was re-named ABC in 1962 and blue metal sheeting was attached to the façade of the building covering all the original decorative detail. It closed in June 1975 for conversion into a triple screen cinema which re-opened on 2nd October 1975. Seating was now provided for 436 in the former balcony and 224 and 213 in the former stalls area.

Taken over by the Cannon Cinemas chain in April 1986, it was closed by Cannon on 11th August 1988 with Eddie Murphy in “Coming to America” screening in screen 1 located in the former balcony.

The building lay empty and unused for several years until it was re-opened in 1995 as a TGI Friday’s Restaurant. The metal cladding which had covered the façade for almost 30 years was removed and the building was cleaned up, proudly pronouncing the ‘Queens’ name again. Sadly nothing can be seen of the cinemas former interior while dining in the restaurant.

TGI Friday’s was closed in early-2007 and the building remained empty and unused until mid-February 2013, when the auditorium was demolished. The central section of the façade was retained, and used for the entrance to a block of flats that were built on the site.

It’s a shame they didn’t keep the interior inact. They did such a nice job outside, you would think that would have found it’s way inside too.

The TGI Friday Restaurant has now closed and the entire building is now boarded up…….awaiting demolition?????

A set of vintage photographs of the Queens/ABC/Cannon Bayswater:
View link