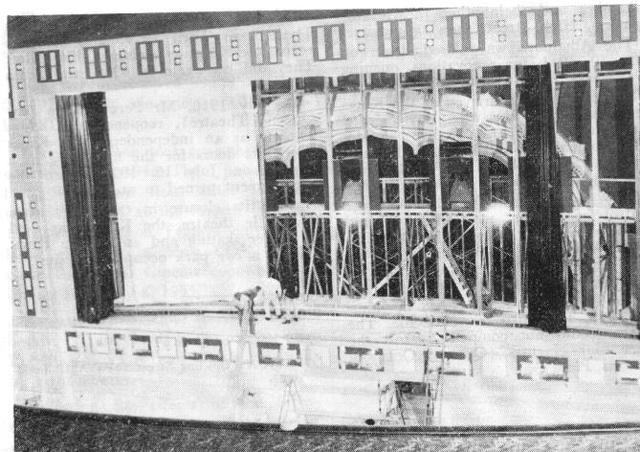 First opened as the 2,000-seat Empire Theatre in 1916. It was taken over by Australian showman Thomas O'Brien in 1928, and re-modeled with a Moorish Atmospheric style, with starred ceiling, minarets, and a Taj Mahal-like proscenium. Re-named Empire DeLuxe Theatre, a Christie 2Manual/10Ranks theatre organ was installed. A new Art Deco style lower lobby was built in the late-1930’s when it was taken over by the Fuller-Hayward chain in 1936.

From 1946, Empire Theatre was operated by the Kerridge-Odeon chain. It underwent renovations in late-1952, and was re-named St. James Theatre. The Christie organ has since been removed and three ranks of pipes are now installed at the Capri Theatre, Adelaide, Australia, while parts of the console are in use at Kelvin Grove College, Brisbane, Australia. Parts of the Art Deco style decoration has been preserved along with the upper Moorish style lobby which has been maintained as a bar. Sadly, much of the Atmospheric style detail was covered over (murals) or removed (plants, urns) in the 1950’s. The ornate plaster proscenium was hidden behind a huge 70mm screen and was damaged in 1969.

The St. James Theatre was closed in 1993 and the Preservation Trust ran the theater as a restaurant and nightclub until 1998. Tripled with some details exposed and preserved in 1998, most of the plasterwork was removed but stored for the future. The St. James Theatre has now reopened as the Rialto Cinemas and is showing movies once again.

The architect was Edmund Anscombe
atmos.

This cinema is now the Rialto3-plex.

It acually closed in 1993 and lay empty until the Village-Rialto Group reopened it.

Does anyone have a photo of the Christie theatre organ that was in the theatre when it was the Empire? Removed about 1956.

From Kerridge-Odeon Organist Iain Kerr (now in the U.K.)
I have three excellent photographs of the Christie theatre organ in Dunedin’s Empire Theatre. I was under contract as regular organist when the Empire was still a double-feature action house and was there throughout its wonderful refurbishment into a super, plush, ace showcase – St James Theatre.
Two of the photos were taken at the gala re-opening night in 1952. The place was sold out with just over 2,000 seats sold – making it second only in size to Auckland’s Civic theatre with its capacity of 2,378 (or 2,750 when its Wintergarden area was also in use). I continued playing nightly at the St James Theatre in Moray Place until the organ was bought in 1956 by Australian organist, Jack Penn-Hughes who originally wanted it for his home in Bexley, Sydney. It is now in full time use in a school in Queensland. Incidentally, after 1956 I played the Wurlitzer in the Auckland Civic when their resident Australian organist, Denis Palmistra, was on sick leave.

I must respectfully point out that the old St James Theatre in Dunedin’s High Street never had a theatre organ. Built as the Royal Princess Theatre in 1862. it was for live entertainment – variety, opera, ballet and including circus acts. It had countless dressing rooms and backstage facilities and because of its tiers of stage boxes, there was no room for any theatre organ chambers. It was re-named St James in 1931 and was, for a long time until its closure, managed by Cecily Richards, a very dear friend of mine who, after the Kerridge-Odeon High Street St James closed, went over to manage the K-O Strand Theatre in Princes Street until her retirement.

If anyone is interested in seeing the three photographs (reference previous posting above) I will email them to you. I have a fourth photo taken of the St Kilda Brass Band playing in the street on Moray Place outside the front of the theatre while the crowds arriving for the gala wait on the pavement.
My email is:

Realise what an old post this is but am interested in the photos of the Princess Theatre. Thanks