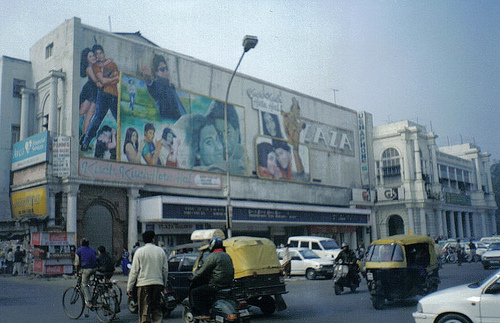 The Plaza Cinema opened in 1933 and was designed by architect Robert Tor Russell as part of the Connaught Place developement. The facade had a Classical style with columns that matched adjoining buildings. In around 1955, it was taken over by 20th Century Fox Corp. to be the showcase cinema for their films in New Delhi.

The facade was covered over in 1967 by a plain stone slab, while inside the auditorium today, has been modernised by a coving of peg board sound insulation tiles which give a bland appearance. Seating is provided in stalls and balcony levels. The cinema is equipped to screen 70mm film and recently underwent a renovation, re-opening in May 2004 by the PVR Cinemas chain.