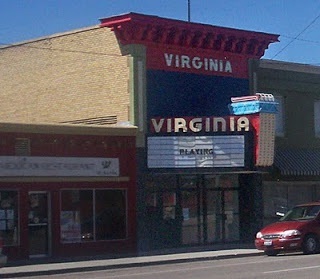 I used to work at the Virginia in 1980 as a projectionist on Sundays when this theatre used to perform Hispanic movies for the Hispanic community that were contain in Bingham County.

Rest of the week, the theatre performed regular 1st run movies that were released at the time..

A brief biography of Francis M. Davis appeared in Volume 4 of “History of Idaho: Gem of the Mountains” by James H. Hawley, which was published in 1920. Here is the part pertaining to the theater: “Since the fall of 1915 Mr. Davis has been engaged in the moving picture business. In the spring of 1918 he erected a modern theatre building on an elaborate scale, costing thirty thousand dollars, and which would be a credit to a larger town than Shelley. The theatre is splendidly equipped and is well supported by the citizens.”

Is this open? no showtimes nor official site for this theatre.

This theatre is not closed. It has been open since 2006. Website is www.virginiatheater.org for a list of current plays.