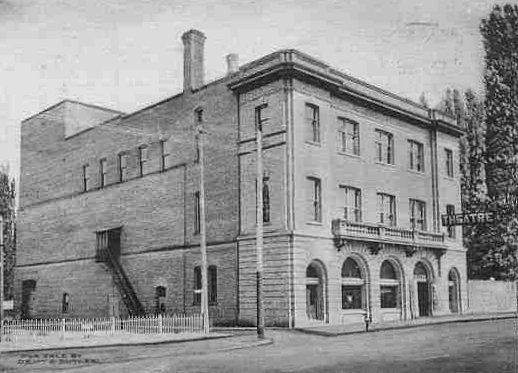 The Temple Theatre opened in 1906. Seating was listed at a total of 853 on the main floor and balcony. The large three-story building had office space on the second and third floor above the entrance and lobby. The front exterior was in Italianate Classical Revival style.

The Temple Theatre was one of five theatres located on Main Street. The theatre had a large stage house which is still intact. The theatre closed in the early-1950’s and the lobby is now used for retail space. Couldn’t find anything on the auditorum.

The Masonic Temple Theatre is listed in the 1905-1906 edition of Julius Cahn’s Official Theatrical Guide. A Temple Theater Company is mentioned in sources published as early as 1915. It probably operated the house under a lease from the Masons.

The original ground floor facade had five round arches, the central three slightly larger and surmounted by a classical balustrade. The exterior style, at least, is not Gothic, but Italianate Classical Revival.

The upper floors of this building still serve as the quarters of the Calam Temple of the Ancient Arabic Order of Nobles of the Mystic Shrine. As the place was built for the Masons, I would imagine that a lodge hall is located on the third floor, suspended above the auditorium, but I’ve been unable to discover any details about the building. The configuration of the fire escapes and fenestration (some of it now sealed) suggests a large room on the third floor, though.