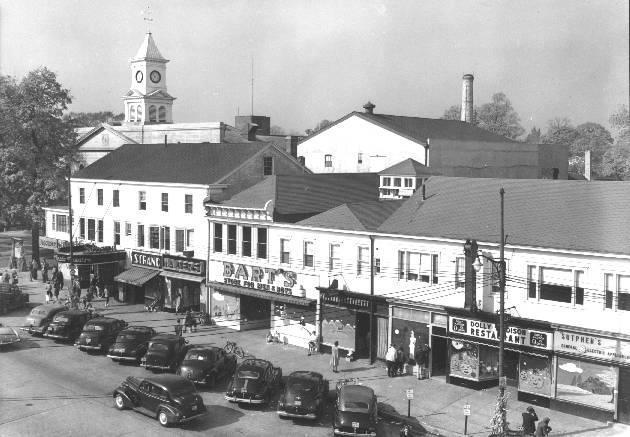 Built in 1913, the Main Street Theatre opened as a playhouse on January 3, 1914 with the play “The Red Widow”. In 1921 new owners took over and it was renamed Strand Theatre, operating as a movie and vaudeville house, reopening on February 21, 1921 with Douglas Fairbanks in “The Mark of Zorro”. It was taken over by Walter Reade in 1925 and was remodeled. In 1934 it was remodeled again, and yet again in 1947. The Strand Theatre screened its final movie Glenn Ford in “The Four Horsemen of the Apocalypse” on April 7, 1962. A fire the following day at a neighboring pizzeria destroyed the entire block.

There is a nice picture of the Strand, ca 1930, on page 26 of “Images of America: Freehold”. The caption states that the Strand burned down on April 7, 1962 along with nine stores.

On page 123 of “Images of America: Freehold Volume II” there is a picture of the Strand in the background of a 1953 parade. The marquee is curved, unlike the aforementioned photo that has a vertical marquee. The curved marquee also reads “A Walter Reade Theatre”.

Tony Hunting, manager of the Strand, Freehold NJ, offered a Saturday morning showing of “Cinderella”. He made arrangements with the local school bus service to pick up all youngsters along the regular routes and bring them to the Strand.

Joseph L. Donahah and Edward Simonson purchased an old apartment building and knocked it over for the new-build Main Street Theatre in 1913. Bathed in dark green, the theater launched on January 3, 1914 on a 20-year lease with the live play, “The Red Widow.” In 1921, the Atlantic Theatre Company Circuit took over the theater converting it from a legit house to a photoplay and vaudeville house. Renamed the Strand Theatre, its Grand Opening took place on February 21, 1921 with Douglas Fairbanks in “The Mark of Zorro.” The Strand went out of business and was sold at a Sheriff’s Sale in 1925 and would be purchased by the Walter Reade Circuit.The Strand was remodeled in 1925 for its relaunch and would be equipped for Western Electric sound on June 7, 1929.

The theatre’s lease was renewed for 20-years in 1934 and got an entirely new front and streamlined interior that Fall. In 1947, the theatre got another major refresh by Walter Reade. In 1954, the theatre was renewed for a new 20-year lease and – after a summer refresh that year – re-emerged with a “Wide Vision” screen to present CinemaScope films beginning August 19, 1954 with the film, “The Student Prince.”

The final show for the Strand turned out to be “The 4th Horseman of the Apocalypse” on April 7, 1962. Just prior to matinee screenings the next day, a lunchtime fire at a neighboring pizzeria decimated the block ending the theatre. In 1963, the theatre-less community heard the announcement of a new theater that would launch in the Britt’s Shopping Center in January of 1964.