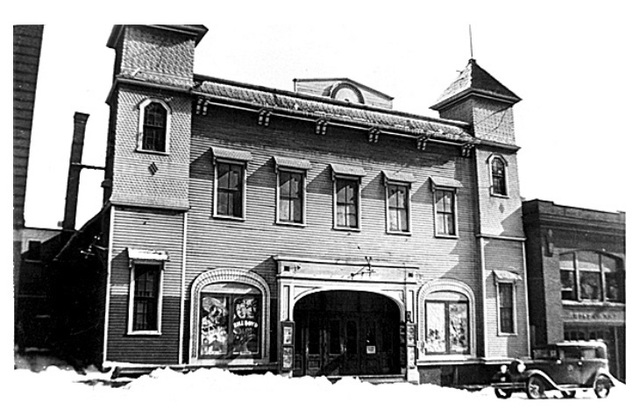 This theater. a conversion of a former Union Hall, showed films and hosted vaudeville acts from October 1908. Admission was five cents, as you may have guessed.

I found a 2009 Bangor Daily News Article that talked a lot about the old theaters around the Bangor Area and it mentioned the Nickel Theater being close by another theater the Gaiety which was in Norombega Hall.

It mentioned that the old owner of the Nickel theater was owned by the Keiths and offered Vaudville acts.

The Nickel theater had sold it’s millionth ticket in December.

Thats all I have to say but here’s a link to the full BDN article.

As early nickelodeons were sometimes peripatetic, perhaps the house moved from Union Street to Central Street (or vice-versa) at some time in its brief career. Perhaps it moved to the Union Street location after the Graham Building was destroyed by the fire of 1911.

This house might have been called the Olympia Theatre after was called the Nickle. Another page in the book from which ken mc’s linked photo came says that the Olympia burned down in 1963, though by that time the building had long since been converted to retail use.

The Nickel Theatre had two locations. The first, on Central Street, opened in August, 1907, and was destroyed along with the Gaiety Theatre in the fire that wiped out much of central Bangor on April 30, 1911.

The second Nickel Theatre was this house on Union Street. According to this article by Wayne E. Reilly, the building, Union Hall, already had a long history, having been built in 1886 and having served as a roller skating rink, a furniture store, and a bowling alley and billiard hall. In 1908 it was remodeled to become the Union Theatre, Bangor’s first full-time vaudeville house.

It opened on October 26, 1908, and operated as the Union Theatre for about a year, then became Acker’s Family Theatre. In 1911, it was taken over by the management of the Nickel Theatre after the destruction of their original house. It remained the Nickel until the early 1920s, when it was renamed the Olympia Theatre. The Olympia operated into the 1950s, but had been closed for several years when the building was gutted by a fire on November 19, 1963.

1922 is most likely the year the Nickel became the Olympia, as it was listed under both names in the city directory that year. The 1908 remodeling of Union Hall into a vaudeville house was designed by local architect Wilfred E. Mansur. The remodeling was done in the Mission style of architecture which was then popular. Reilly’s Daily News article features a vintage photo.

The Theatre Historical Society archive has the MGM Theatre Report for the Olympia, it’s Card # 336. Address is Union St. There is an exterior photo taken May 15, 1941. Condition is Poor. The report says it opened in 1909 and was showing MGM movies. It had 600 seats downstairs and 250 in the balcony.

I remember going to the movies here in the early 50’s. My step grandfather (Everett Bickford) was the projectionist for a few years at that time. I was too young to remember what the admission price was and maybe we got in for free because grand dad worked there. I do remember buying popcorn in a small brown bag for a nickel. I also remember that the place smelled and thus probably why it was referred to as the Rathole but of course I was too young to know that.