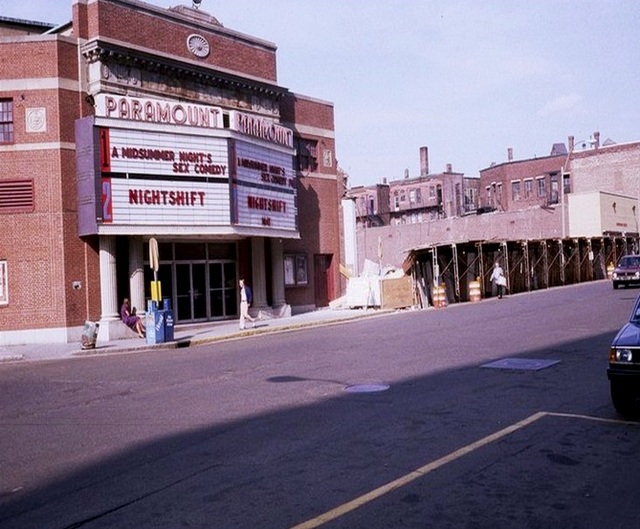 This was a great & grand theater, in the tradition of moviehouses that resembled their dramatic-programmed kin; spacious lobby and balcony, elegant and winding staircase, admission & refreshments affordable to children & families, and located in a city center, in the heart of a community—a palace of prodigious projections!

Though I lived in next-door neighbor Waltham, quite often when going to Saturday or Sunday matinees with my sister and aunt(s), we would choose this Newton venue because of its next-best proximity. Also, since my aunts lived in the other-side neighbor of Watertown, which didn’t have as impressive or close-by a theater (and later none at all), but which town’s square was just a few minutes'cab ride to Newton Corner, and because of my father’s family’s roots in Newton (in fact, my Dad’s brother in-law owned Newton Glass Co., a picture-framing store around the corner from this theater), or maybe just because sometimes the films we were choosing weren’t playing at Waltham’s old Embassy, we opted for the Paramount.

Development around the Massachusetts Turnpike resulted in many changes over the years in the retail landscape of the area in which this theater was situated, but it was still a perfect location, right off the Pike and a with bus stop at its front door—so a great spot for children, students & pedestrians dependent upon public transportation! There was also a small-but-adequate municipal parking lot in back of this retail block. And there was a great pizza shop around the corner, on the next block, called Pellegriniâ€™s—one of those real Italian establishments where they threw the pizza dough up in the air, in the window for passers-by to watch. Later, in the early â€˜70s came the more atmospheric Boston Seafood Restaurant, and, I believe on the same block as the Paramount was also one of a small chain of donut shops called â€œCottage Donuts,â€ the central products of which had a flavor all their own—somehow crisper and different from the doughy spheres churned out by that Boston-based institution which became the international Dunkinâ€™ Donuts empire, or those produced by the small-but-larger-than-Cottage chain known as â€œMister Donut.â€

Across the street from the Paramount, hung out over the Pike like a large, festering concrete sore thumb, loomed a real symbol of corporate and financial growthâ€"a complex that included a branch of a large banking institution, a Howard Johnsonâ€™s Hotel & Restaurant, and a Red Coach Grill Restaurant (now a Sheraton Hotel and Applebeeâ€™s). The era of chains and expanded office and condo development were pushing the smaller retail shops and independent theaters off the map! The Paramountâ€™s place amidst all this â€œprogressâ€ meant its days were numbered!

Actually, I do have a few fond memories of some warm family meals at that Howard Johnsonâ€™s, which surprisingly had a pretty good spaghetti & meat sauce dinner on Wednesdays (which in Boston, as many then knew, was â€œPrince Spaghetti Dayâ€). I even worked washing dishes at that Red Coach Grill, lasting just one school night before I realized its impracticality, since, with busses no longer running, after each shiftâ€™s conclusion would necessitate my father having to retrieve me in his car right around the time he would have been heading off to bed himself!

In any event, while the Paramount prevailed, I do recall seeing â€œBambiâ€ there, on a double-bill with the Dean Martin-Jerry Lewis comedy, “Pardners.” I also remember having seen “Mary Poppinsâ€ at the â€˜Mount, one of the couple of times I saw it in a theater. I went to the Paramount much more as a child than in adolescence, just took it for granted that it would always be there, just as I had with my hometown theater, the Embassy. If I had known the fate that awaited the single-screen movie theaters, I certainly would have availed myself more of that great movie palaceâ€™s grandeur while I had the chance!

Why on earth didnâ€™t we all start a revolt against the coming age of Cineplexâ€™s?

I think there’s a Bertucci’s Pizza chainstore now, where Pelligrini’s once featured the white-aproned Donatello doughboys putting on their window shows, and probably a Dunkin' Donuts and/or Starbucks in place of the Cottage coffee & donut shop, where townie retirees once spent their mornings reading the “Record American” while getting 10-cent Java refills; on the block where formerly flourished fleeting, flickering moments of majesty at a movie palace called The Paramount!

does anyone have any knowledge or information an an event at the Paramount in the early 1950s? At the opening of the movie Cinderella, there was a contest to find a local “Miss Cinderella”. The winner and her date was escorted to a Mercury convertible to be chauffered around for the evening. Ed Sullivan made appearance at the Lincoln-Mercury dealership either that evening or soon after. I’m specifically looking for an article about the event but any info you might have would be appreciated. (Researching it for my father, Rodd Exelbert, who was involved in the event.) Thanks!

jimmo, when you say that the Paramount was “in the tradition of moviehouses that resembled their dramatic-programmed kin,” do you mean that it looked like a performing arts center (opera house or Broadway-type theatre)? If so, Do you think it could conceivably have been converted into one?

funnydave—Yes, my remembrance of the Paramount is that it was more opulent than even the Embassy in Waltham, though in my mind either could have been a Broadway-type theater with a little sprucing up. I’ve actually never been to a Broadway theater, only an off-Broadway venue in the Village and the Beacon Theater in NY, but I am basing this perspective on my attendance at theaters in Boston’s theater district—the Colonial, Shubert and Wilbur Theaters, also the Orpheum (for concerts). Also, I think I’ve seen enough films and TV video of NYC theaters to have an awareness of their appearances, at least superficially. Suffice to say the Paramount was a classier venue than any of these cineplexes one will find today, all so generic looking.

The heading above says that the Paramount had 1,268 seats. There are 2 movie theaters listed under Newton MA in the 1927 Film Daily Yearbook. One of them, the Community Theatre, also has 1,268 seats. It was open 6 days per week. Was the Community a prior name for the Paramount?? The other movie theater was the Newton Opera House, with 1,200 seats, also open 6 days/week.

The Paramount was most likely this theater project noted in the September 22, 1921, issue of Engineering News-Record

“Beacon” was an obvious typo for Bacon Street. An item in the July 28 issue of the same publication had said that plans for a theater on Washington Street for the Newton Theater Company were begin prepared by the Boston firm of Desmond & Lord. George Henri Desmond was also the architect of the Portland Theatre in Portland, Maine. The firm also drew plans for a large theater in Worcester, Massachusetts, in 1922, but I haven’t yet been able to identify it, assuming it was completed.

Cinema Treasures says the Paramount Theatre seated 1,268. Ron Salters commented (on April 2, 2006 at 8:59 am) that the Paramount seated 1,212 — 760 on the main floor and 452 in the balcony. Does anyone know for sure who is correct? Also, when did the Paramount close and when was it demolished?

1,268 most likely comes from a Film Daily Yearbook listing. The FDY was not always accurate, but sometimes it was. The MGM reports were probably more accurate, but the one Ron cited was from 1941, and during the war many large, old theaters covered over their disused orchestra pits and added a couple more rows of seats because business was booming and it was very difficult for chains to get new theaters built due to restrictions on new construction, so it was a cheap way to add new capacity.

Seating capacities tended to fluctuate over the years, anyway (re-seating with larger seats and maybe wider rows, part or all of a balcony being closed off as business declined, seats from the front rows being removed to replace broken seats farther back in the house in theaters that couldn’t afford new replacements, etc.,) and theater operators, for various reasons (such as the union regulation that once required two projectionists in houses with more than 1,000 seats, leading managers to sometimes undercount,) didn’t always give accurate counts, so the exact number of seats in any given theater at any given time is often moot. For these reasons I look at the seat counts at Cinema Treasures as usually being no more than ballpark figures.

As for the demolition date, Ron Newman’s comment of March 28, 2006, cites a September 6, 1982, newspaper article saying that the entire block was slated for demolition to make way for an office building, and the Paramount was the last business on the block that was still open, so the closing and demolition most likely took place in late 1982 or early 1983. The 3-story brick office block on the site now has a very 1980s look.

Growing up in neighboring Watertown, back in the 50’s 60’s, most of my movie experiences were at The Coolidge theatre in East Watertown on Mt. Auburn St. However there were many times when I went to The Paramount. It was a single screen in those days, a really beautiful theatre. Some of the movies I remember seeing there, “Dementia 13” (Francis Ford Coppola first film) “I Saw What You Did” (William Castle classic) “Shaft” (Gordon Parks classic) and “In the Heat of the Night” (Academy Award winner, I’ll never forget it!) GREAT memories at The Paramount in Newton.