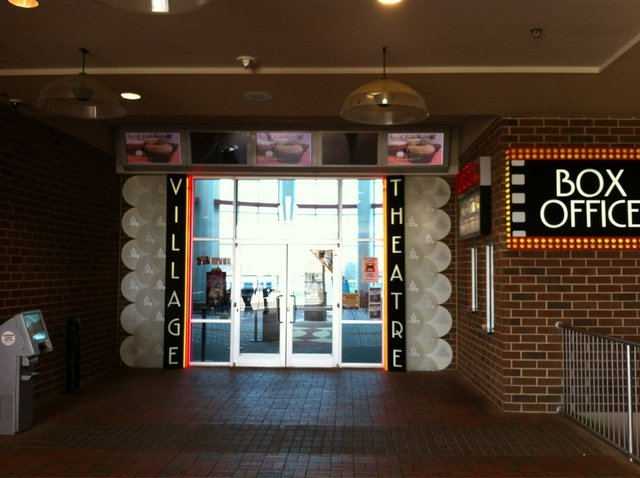 This new cinema opened March 24, 2006 in an upscale shopping center in suburban Charlotte. It has five state of the art screens and was operated by locally based Consolidated Theaters but programmed with art films by the Landmark Theater chain. It brings a new level of amenities such as reserved seating, beer and wine and upscale concessions to Charlotte film goers. The theater is somewhat oddly located on the third floor of an exclusive new shopping center. In April 2009 it was taken over by Regal. It was closed on February 6, 2020.

This is a great place to see a movie and the programming looks terrific so far. I wonder how long the art programming will last though. I visited four times during opening week and it was almost empty each time. One of the auditoriums holds almost 300 and I was the only one there for a screening of ‘Tsotsi’. The concessions are great – better than the offerings at any other local theater – but I don’t like the no matinee pricing policy which is a first for Charlotte. Admission is $8.50 or $12 for reserved seating but I don’t know if anyone has taken them up on that yet.

The programming remains true to its original art house intentions but attendance still seems sparse. The managment has added discounted matinee pricing which is a relief. Often times the programming mirrors the Manor Theater – the other long time art house in Charlotte – but with 5 screens the Ballantyne can offer a broader selection. I like the movie going experience at this theater but I don’t like its location way out in the suburbs. The ultra high end shops in this shopping center somehow seems at odds with the art house programming. I prefer a grittier setting for my alternative cinema.

I certainly hope they have Ballantyne projectors in the booth!

Hi everyone. Just wanted to let everybody here know that Friday, April 24th, the Ballantyne Village Theatre will be screening TOKYO!, three short films in one movie by three different directors, including acclaimed director Michel Gondry (Eternal Sunshine of the Spotless Mind). I saw an advanced screening of it and was totally blown away by it. It’s been getting great reviews, so I recommend checking it out this weekend!

Recently was acquired by Regal Cinemas. The theatre is now one of three theatres in Charlotte that is under Regal’s Arthouse Cinemas which is owns and operates the Manor 1 & 2 Theatres(on Providence Road) in Charlotte,and the Park Terrace 6(Intersection of Park and Woodlawn Roads in Park Road Shopping Center).

Closing announced for some time in the first half of February 2020. The space is being converted to office and retail use. This will leave Charlotte with only one art house cinema – the 2 screen Manor Theatre.