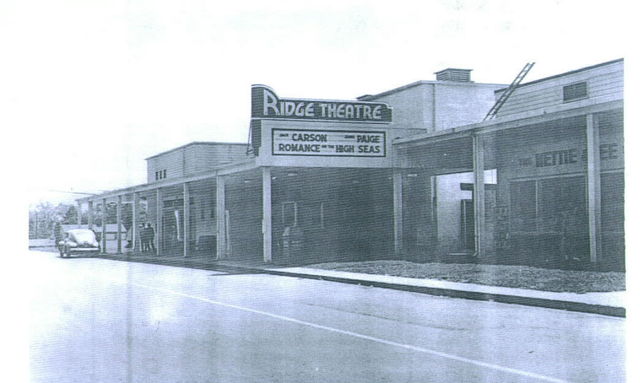 The Ridge Theatre was opened on April 6, 1944 with Rosalind Russell in “What a Woman!”. It was part of the Greater Huntingdon Theatre Corporation, the circuit that operated just about every theatre in the county during the mid-twentieth century.

The August, 1993, issue of Boxoffice makes a reference to a Ridge 1-2-3 Theatre in Oak Ridge. Was the Ridge Theatre triplexed, or was this a new theater?

The December, 1981, Boxoffice had mentioned the Grove 1-2-3 and Ridge Theatres at Oak Ridge. Both were operated by the Greater Huntington Theatre Corporation.

The Ridge Theatre dated to the early 1940s, having been already in operation when it was mentioned, along with the Grove and Center theaters, in Boxoffice Magazine’s issue of November 4, 1944, in an item about the opening of the Jefferson Theatre.

The Ridge was a double – I saw “The Empire Strikes Back” there in 1980 while my Mom went to see “The Blue Lagoon.” I do remember the Grove 1-2-3, so perhaps the reference to a Ridge 1-2-3 is a mis-print. The Ridge was definitely closed before 1993 and is now retail/commercial space on Broadway Street in Oak Ridge. It never was on Main.

Following is a link to the Flickr page for the American Museum of Science and Energy in Oak Ridge, showing the Ridge (with two different marquees) Grove, Center and Jefferson Theaters in Oak Ridge, all built by the Army Corps of Engineers for the Manhattan Project, 1942-1945. Also, the Skyway Drive-In, circa 1960s.

Forget the above it was playing at the same time at the RIDGE THEATER. Sept 24 1967 NOW SHOWING THE SOUND OF MUSIC with WHAT’S NEW PUSSYCAT playing next with HOW TO MURDER YOUR WIFE.

The Ridge Theater opened on April 6, 1944, showing WHAT A WOMAN.

Can anyone remember the seating capacities in each auditorium?