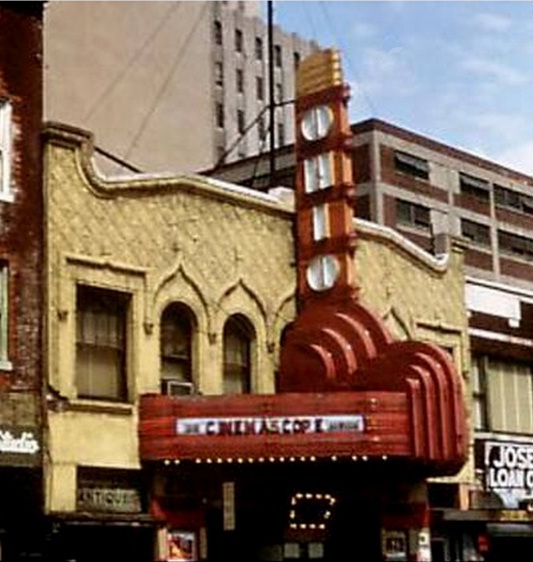 The Ohio Theatre opened on November 15, 1919. Seating was listed at 1,500 which included balcony seating. The architect for the theatre was Norman H. Hill. The Ohio Theatre had two different organs. I could find no info on the first but the second was a Marr-Colton 3 Manual.

The Ohio Theatre closed in 1970, and has since been demolished.

The console of one of the Marr and Colton organs mentioned above is now part of a theater organ that is being installed in the Grand Theater of East Greenville, P.A. See www.thegrandtheatre.org for details.

It was a SETTOS THEATRE with the homeoffice in the OHIO THEATRE. George Settos was the owner.

Below copy accompanied the banner photo of the Ohio Theatre on the Historic Columbus, Indiana Facebook page.

One of several Frank Rembusch owned theaters in central Indiana. At the time (summer, 1919), Rembusch was also having a new theater built in Martinsville, Indiana. As of 1919, Rembusch owned the American Theatre in Columbus (later, the Rio). It would be another four years before he would lease the Crump Theatre from the Crump heirs. This is the Ohio Theater, 40 W. Ohio Street, Indianapolis, opened November 15, 1919 (demolished in the 1970s). Architect was Norman Hill. Hill was architect for several buildings in Columbus— —the original East Columbus School (State Street), 1905, demolished in the 1970s —Columbus High School gymnasium (Central School campus), 1923, demolished in 2008 —Wilson building (Central school campus), 1923, demolished in 2008

I believe the copy I posted was written by David Sechrest, who authored the book “Columbus Indiana’s Historic Crump Theater”, published by The History Press.

Below is a link to the Historic Columbus, Indiana Facebopok page.

The New House Will Seat 1,300 Patrons and Is Expected To Be Completed in Ninety Days

PLANS for a handsome new motion picture theatre, to be erected at 42 and 44 “West Ohio street, Indianapolis, have been announced this week by David A. Coulter, secretary-treasurer of the Ohio Building Company, of Indianapolis. The new structure, which Mr. Coulter estimates will cost in the neighborhood of $75,000, will be known as the Ohio. John R. Welch Is President. The Ohio Building Company, recently organized, has been incorporated under the laws of Indiana with a capital stock of $100,000. The officers of the company are John R. "Welch, of Indianapolis, president; Frank J. Rembusch, of Shelbyville, Ind., vice-president, and David A. Coulter, secretary and treasurer. The company has just obtained a forty-nine year lease on the buildings now standing on the proposed site.

The theatre will have a frontage of 44 feet 3 Inches and will have a depth of 202 feet 6 inches. It will be constructed of reinforced concrete and steel and under the terms of the contract is to be completed in ninety days. It will seat between 1,200 and 1,300 people, 800 of whom can be accommodated in the orchestra. Lobby Will Be Distinctive Feature. The distinctive feature of the theatre will be a large lobby which is to have a depth from the theatre entrance to the auditorium of forty-three feet, and is to be thirty feet wide. The purpose in providing this much room is to overcome congestion. The plans for the first floor reveal an attractively decorated interior. There will be one center aisle with seats flanking on each side, and a mezzanine floor with lounge and ladies' rest rooms. The mezzanine floor will have an opening that will afford a view of the main auditorium. Stairs will lead to a third floor, which will be used as a balcony. Rembusch Prominent in Management. The interior of the theatre will be finished in large, plain panel walls with marble tile wainscotings and two decorative boxes will be built on each side of the stage. These boxes, when not used for seating purposes, can be used for the staging of small vaudeville entertainments. Frank Rembusch, vice president of the Ohio Company, is one of Indiana’s leading picture showmen. He has gained a national reputation for enterprise.