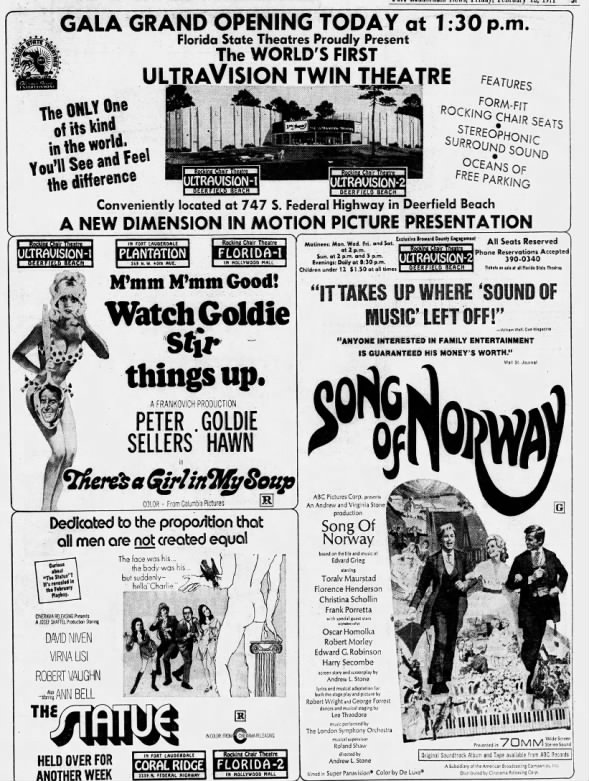 (Replacing a couple long-ago comments that had now-defunct links)

Like the Ultravision Deerfield, the Dolphin was shuttered by the mid 80s, becoming one of the first local locations of Home Depot. Nowadays, can’t look in the pizza section at Aldi without thinking the Rocky Horror Shadowcast once frolicked not far away…

Used to Drive all the way to the Deerfield UltraVision Theaters after they opened and Loved the Continental Seating 1/3 Sized Curved Screens, the Comfortable Seats and the Color Decor if i’m correct the South Screen was ( Red ) and the North Screen was ( Gold ) Aw I Miss this Style Theater it was very Unique !

I never knew Raul Trellis by name, but I think I remember him: Tall gentleman?

Around 10 years after the Ultra-Vision closed, went on a weekend art film trek to Coral Gables, when the Miracle had occasional subtitled fare. If it’s the same man I’m thinking of, my ticket was torn by Raul, and he recognized me immediately.

Hi Ron! Marvin is correct. Raul Trellis had a stroke or something that impeded his speech so he was hard to understand, even in Spanish. Gino typed at the Shores. He claimed to have been the former speaker of the Cuban congress under Batista. Both were great men. All is good here.

The prototype UltraVison Theatre in Charleston, South Carolina, was developed by ABC-Paramount affiliate Wilby-Kincy and designed by architect William Bringhurst McGehee of the firm Six Associates. The Deerfield Beach UltraVision was based on McGehee’s original plans, as was Florida State Theatres first UltraVision house, the single screen Springs Theatre in Ocala, Florida, which was completed only a few months before the Deerfield Beach project.

A Boxoffice article about the Ocala project said that McGehee’s plans were adapted for Florida State Theatres by an architect named Bill Murphy, so it sems likely that he was also involved in the Deerfield Beach project. I haven’t been able to positively identify Murphy, but it’s possible that he was Bill Jackson Murphy, a founder of BMS Associates, a Columbus, Georgia, firm that, according to Murphy’s obituary designed numerous theaters for “…Martin Theaters, Fuqua, United Artists, Carmike Cinema and Southern Theaters….” in the southeast and Texas.

Al, while you are at it, what was the old doorman’s name at the shores that also typed up the reports?

Hi Al, it has been a while, it’s Ron, I hope all is well. Marvin and I were trying to remember his name, the first name was Raul. He was the one that everyone would ask you to translate what he was saying and you replied he speaks the same way in spanish.

How are things going for you, still in New York?

Was he an older Cuban gentleman? Rafael Bellestre?

Does anyone remember the name of the manager of the Ultravision theatre around the late 1970s?

I watched the Ultravision being built in the late sixties . The grand opening was a big affair , spot lights , a few movie stars , and guest were dressed to the 9’s ( formal attire ) . It was absolutly beautiful , one of the last big screen , big sound theatres . I worked there from 1974 to 1977 . It was a great experience . The midnight movies were off the chain . We had local bands play ,than a short ( like the three stooges ) and than the feature film ( my fav was Led Zepplins “ The Song Remains The Same ” ) . It was sad to see it torn down but the experience of seeing 100s of movies will be with me forever .

Coming soon where the Ultra-Vision once stood: Aldi. Additional stores supposed to follow.

I grew up in Deerfield Beach in the late 70s, and the Ultravision was the best thing about that town, next to the beach. It was a fantastic theater with the biggest most comfortable seats I’d ever experienced in a movie theater up to that point. I saw many great movies there, like Blade Runner and Raiders of the Lost Ark, both of which I watched over 30 times in that theater. I would go in for the matinee in the afternoon and stay through three or four viewings. The theater was so big and so dark that all I had to do was hunker down in the seat in between showings and the ushers would never see me. :) It also had one of the best sound systems of any theater I’ve ever been in. Four huge speakers with with something like 20 inch woofers mounted high on the walls on each side of the theater.

The first time I took the girl to the movies, in middle school, was at the Ultravision, Smokey and the Bandit 1977. Later when I was a teenager it became the place to go see midnight movies, like The Rocky Horror Picture Show, and hang out in the parking lot. I was sad when it closed and was converted into a church.

I remembered the Gold Coast drive-in as well, used to see Cheech and Chong movies there. It closed down in the 70s and became a hangout for kids before they tore it down. We built tree forts in the Australian pines, and ransacked the old buildings, nothing but bags of paper cups and popcorn butter mix left behind. It used to be the spot local kids would go to hide from the Deerfield cops when we skipped school. Tore it down to build the Winn-Dixie shopping center, we were so mad that they were destroying our hangout, several of us would go into the construction site every night with sledge hammers and axes to destroy what the construction workers had built each day. We were so effective in demolishing cinderblocks and insulation panels that the Deerfield Police Department had to post an officer there through the night to prevent the deconstruction havoc we wreaked every evening. :) The only thing that survived of the Gold Coast was a line of those tall pine trees that were left untouched, which may still survive even today.

No argument about the posted opening announcement. But I remember my parents having passes for a pre-opening test event at the Ultravision. Not sure, but it might have been a screening of 1971’s The Trojan Women.

I uploaded an ad from February 11th, 1971 with an picture of the theatre.

For more background on the Ultravision concept, check the commentary and links at:

Also meant to mention that if the Deerfield Ultravision went out with a whimper, it was still packing them in almost to the end: “Raiders of the Lost Ark,” “ET: The Extra-Terrestrial,” and “Beverly Hills Cop” each played for the better part of six months.

Thanks for locating that grand opening ad, Mike. The Gold Coast Drive In (a couple blocks south) and GCC’s Pompano Cinema (2 ½ miles south) certainly weren’t celebrating that day. In particular, Pompano lost their lock on Disney product, and changed their policy to allow R-rated films.

The Ultravision fed my moviegoing habit from ages 9 to 24, supplying kiddie/summer matinees (often MGM and Selznick library classics) early on and later introducing me to the midnight movie movement. I know now that’s what they needed to do to keep the place solvent, but it was a nice coincidence to have those movies readily available. One hasn’t lived until they’ve stood in a long line populated with “A Clockwork Orange” and “Dawn of the Dead” fans.

Interesting that the grand opening ad mentions “Song of Norway” being presented in 70MM and stereo. A projectionist there in the later years told me they didn’t have the tracks for 70MM, and stereo wasn’t installed (south auditorium only) until 1980 (“The Elephant Man” being the first I saw with enhanced sound).

The Ultravision have other hoped-for spectacles in its early years: widescreen travelogues like “The RA Expeditions” and the psychedelic reissue of “Fantasia” (except for me and my mom, hippies occupied all 648 other seats — standing ovation for Mickey Mouse, mock cries of “Shame!” upon sight of the bare-breasted centaurettes, a massive cloud of weed…). They did their best to ballyhoo the likes of “The Great Waltz” remake, spelling out the film’s name all the way across the front of the building, decorating the lobby — and mainly to empty rocking chair seats.

I was there closing night in September 1985, purely by chance. A subrun of “The Emerald Forest” was booked on the north screen; I’d seen it in one of the crummy tube theaters elsewhere, and was eager to revisit it on a real wide screen. Spotted a tiny sign reading “Goodbye” near the entrance. The manager came over and thanked me for the support. He introduced me to the regional rep for Plitt, who made it official: the Ultravision was now deemed a dinosaur, and a church was moving in.

Almost 25 years later, I’ve been meaning to go to one of their services just to see what they’ve done with the place. It’s obvious that the former south screen has now been refitted with offices and classrooms, and the north round provides the house of worship.

Certainly not forgetting you Rocky Horror cast members, some of whom I got to know and write about for the local community college newspaper! Heard you guys were having so much fun they almost had to call the sheriff a couple times : )

Al, you are a few block off. Google street view is at View link

This opened on February 12th, 1971
Opening announcement is at View link

The address is:
823 S. Federal Highway and the building can be seen on this Google satellite map.

It’s the one that looks like three water tanks.

WOW….must be on the same wavelength as Cyberactor. On a whim a did a search for the Deerfield Ultravision and found this. I performed Rocky Horror with him way back when and I agree with everything he said. The Ultravision was the BEST theater to do Rocky in, it had the huge ramp in the front and a great spotlight…that usually followed the action…unless of course there was other action taking place in the spotlight booth (LOL)!! I still can’t believe it’s a church…all the Holy Water in the world can’t take all the sins that happened there. And boy did we have fun making them happen!!!

I used to perform the Rocky Horror Picture Show on Fridays and Saturdays at midnight at the Ultravision back in the early 80’s. It was a magnificent theatre. Huge, with a big stage in the front where we could do our show. A big ramp went from the floor up to the screen and we did all kinds of wacky things up there. I’ve done the Rocky show in a few other theatres, but that one was the best.

I also saw E.T., Raiders of the Lost Ark and a million other movies in that theatre. Shame it’s a church now. It wouldn’t be if they knew what we did in there!

This was an ABC Florida State Chain Theatre.