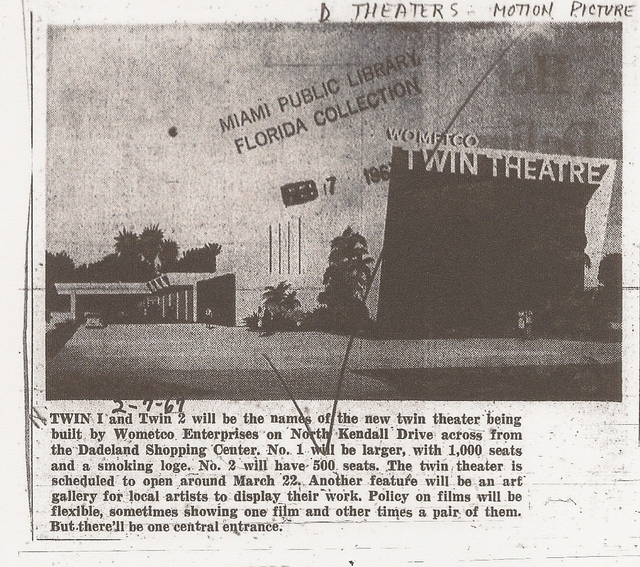 The Wometco Twin Theatre opened on March 24, 1967 with Paul Newman in “Hombre” & Marlon Brando in “The Countess From Hong Kong”. Seating was provided to 1,000 & 500. It often ran exclusives and roadshow presentations. Located across from Florida’s then busiest mall it was a suburban smash hit later a victim of land values and nearby multiplexes.

Excellent sized screens seating 1,000 and 500 with plush seating were undermined by tacky turnstyle entrance equipment. It later became a triplex.

What multiplexes are in the area of Dadeland Mall that caused the closure?

The Dadeland was badly hurt by the opening of Bakery Centre, Movies at the Falls, and Kendall Town & Country. At the time, even those malls looked better than the dog-eared Dadeland, which was later refurbished.

Yes, Dadeland was a dozie of a twin. I hated when it was chopped up for the third theater. I remember needing 1000 seats when Empire Strikes Back came out. The lines wrapped around the building and still sold out show after show —1000 seats a pop! The concessioneers had to carry sodas around their necks and work the lines! Just like in the stadiums! The experience on that huge screen in that big theater isn’t the same as seeing something in a tiny 1 of 10 theters!

The Dadeland Twin was a great showplace. I remember seeing
“Midnight Cowboy” there in the late ‘60s. I don’t remember
any particular decor or whether it had a screen curtain…probably
not, just good film presentation on the giant screens. I also
saw “Carnal Knowledge” there starring Candace Bergen, I believe.
The film attracted all the usual reactionaries, particularly in the South, who tried to ban it.

Those “Carnal Knowledge” ads carried a Wometco warning about the language so the film didn’t meet with the stupidity that tried to shut down “Woodstock” and “Last Tango in Paris” at the Coral.

The entire parking lot has been filled in with new buildings right up to the sidewalk of SW 88th Street/N. Kendall Drive in the past two years.

Yes, the address was 7440 SW 88th Street, Miami, FL 33156, which was never in the City of South Miami, but on the eastern edge of an unincorporated area of Miami-Dade County known as Kendall.

A better quality grand opening ad below and the photo section. 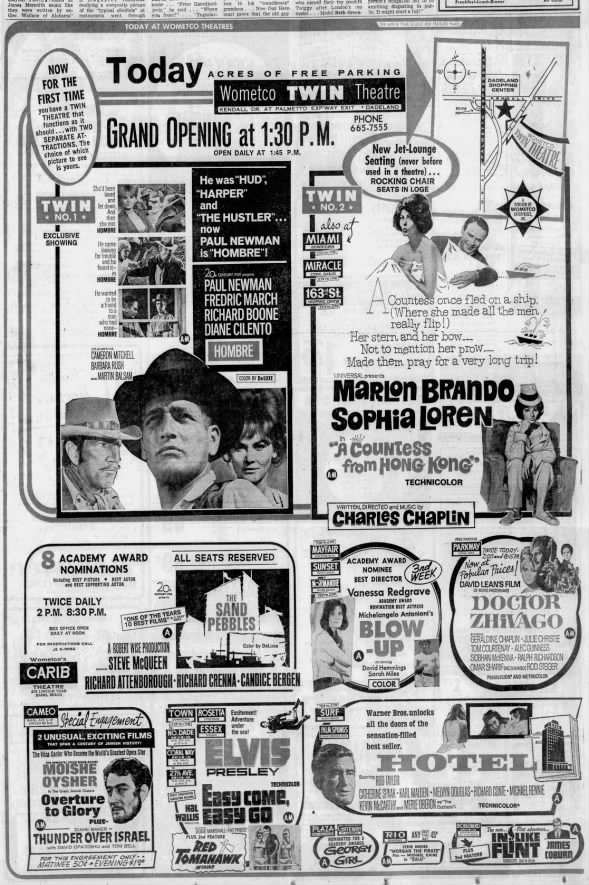