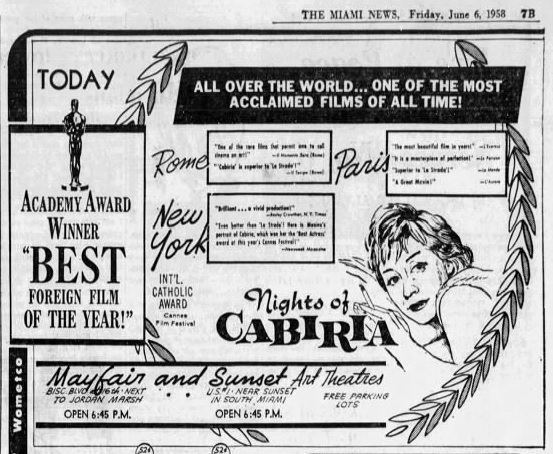 I believe, once a horse stable which was converted into the South Miami Theatre in 1946. In early-1952 it was brifley renamed HiWay Theatre. The Sunset Theatre was opened on July 25, 1952 with James Stewart in “Carbine Williams” & “Lew Ayers in "New Mexico”. By June 1958 it had been renamed Sunset Art Theatre. It was later taken over by Wometco Theatres. It survived well into the 1970’s thanks to the population shift and the University crowd that sustained it as an arthouse venue.

The Sunset Theatre was smallish and non-descript with hardly a lobby but was often the only Florida run for Ingmar Bergman, Truffaut or Fellini movies and any soft-core vehicle that could be sold as “art”. Sometimes dated with the Mayfair Theatre, Parkway Theatre or Normandy Theatre.

It was demolished around 2004.

Well, this may be a bit late, but yep, remembering Gallipoli as quite the tear jerker. I don’t think I was working at the Sunset at the time, but do recall many a slow night (especially during the week) where one of my functions as manager would be to convince the one or two who straggled in to LEAVE with a refund and a free pass to come back another night to avoid the costs of showing a film (yes they were films!) to just the couple of customers! I still have to look as I pass everytime I drive by when I am in town!

Gailsey, glad you joined the conversation (some of these threads go on for years, it’s never too late). In light of your recollections, I’m glad my few trips to the Sunset were on busier weekends (it was a 90-mile round-trip for me, when Broward engagements weren’t imminent). When were you at the Sunset?

W.F. Caudell and F.G. Murphy were the first owners of the South Miami Theatre according to an item in Boxoffice of June 24, 1946. Boxoffice of March 10, 1951, said that W.F. Caudell had reopened the Hi-Way Theatre in South Miami after remodeling the front, adding a new marquee, and painting and reseating the auditorium.

The July 1, 1953, issue of Boxoffice said that the Sunset Theatre at South Miami was being operated by Milton Frackman. The earliest mention of Wometco in connection with the house that I’ve found is in the April 9, 1955, issue of Boxoffice which referred to the Sunset as “…the Wometco circuit’s newest addition….”

In the late 1950s and early 1960s, Boxoffice always calls the house the Sunset Art Theatre. By the late 1960s it’s back to calling it simply the Sunset Theatre.

In response to Porridge…. I worked as manager briefly, I don’t know, 3-6 months probably in the summer and fall of 1981. I worked at several of Wometco’s theaters in Miami learning all the trades… but relocated to Michigan and missed it all!! Its too bad Broward did not offer any similar showings, but then again where I live now I would have to travel a similar distance to see any “art house” offerings! I loved the Sunset though, its tiny concession stand, its tiny projection booth and its even tinier office!

The Sunset Theater was already closed when I arrived in Miami in 1987, so I never got to see what the inside looked like when it was open for business.

In the late 1990’s, I visited the marine/boating supply store that was then still open immediately to the left of the defunct theater. A doorway shaped opening had been created through the wall shared by the store and theater near the front of the store, so I walked through.

The seats and screen were gone and the walls were black. A garage door had been installed below where the screen would have been, probably for the boat trailers that were then in the old back parking lot. Behind me there was no lobby, just the front doors and dusty ticket booth. (I’ve heard the lobby had been small or almost didn’t exist, or there may have just been a curtain a few feet in from the front door to separate it from the seating area?) To the left of the front doors was an abandoned popcorn machine. Above all this I could see the square hole through which the projector had shone its lamp. …. I tried to imagine having seen films here, but felt like I didn’t have enough to go on.

A couple years later I read a Miami Herald article saying that the Bacardi family owned the property and there was talk of maybe reopening the cinema and adding some stores behind it. Then at some point I noticed some new walls installed just inside the front doors and a decal with the words “Rum Bum” above the door. There may have been a banner hung and/or I may have read that a surf shop was to open there, but months later nothing more was done.

I used to enjoy fantasizing about running a cinema there as I would walk by on my way to Winn Dixie or downtown South Miami, but at some point in the early 00’s, maybe 2003, it (and the marine supply store) was demolished.

The land was vacant for several years and now a large grey office/business building has opened on the property. The older buildings next door including Fox’s Sherron Inn (bar/restaurant from the 1940’s) have recently been fenced off for probable demolition, meaning all the surrounding buildings from the time of the Sunset Theater will soon be gone.

I imagine it was fun, back in their day, to have dinner at Fox’s then see a movie at the Sunset, or for drinks at Fox’s after a movie.

The exact spot where the Sunset Theatre once stood before demolition is now occupied by The Halal Guys restaurant, which opened in the still mostly empty large grey/white building in the last few days.

In recent months the old buildings that existed in the theatre’s day immediately to the south including Fox’s have been gutted and the outer walls will be filled with more restaurants from what I understand, with the vertical neon Fox’s sign remaining as a tribute.

I wish the photo linked to in Al Alvarez’s April 13th, 2009 comment with the vertical red “Theatre” sign could be in the “Photos” section.

The Halal Guys restaurant referred to in my first May 9th, 2018 comment is closed so the exact spot where the Sunset Theatre once stood before demolition is now an empty storefront.

Meanwhile a version of Fox’s has opened in the space where the original (that I’ve mentioned in my previous comments) had been with similar decor and dim lighting but a different floor plan. The neon Fox’s sign that had been on the front of the building since the 1940’s has been moved to the back above where the main entrance is now.