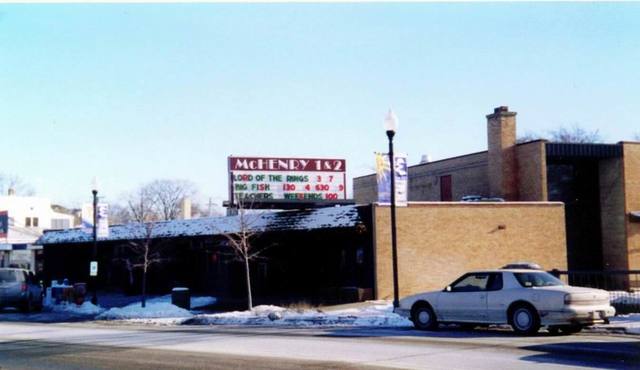 The Empire Theatre was opened on June 28, 1919. By 1929 it was operated by Warner Bros. Circuit Management Corp. who operated the theatre until 1936. It was renamed the Colony Theatre in 1939, it burned on November 4, 1951, destroying the entire building except the front wall.

It was rebuilt to the plans of architect John van der Meulen, and opened on February 9, 1955 with Tony Curtis in “So This Is Paris”. It had 680 seats. It was later twinned in the 1980’s and closed suddenly as a discount house managed by Rhyan Management (RMC) in January 2000. It reopened in 2003 as a discount first-run theatre operated by “C” You at the Movies. It had closed by 2014. It reopened January 18, 2018 and a third screen has been added which opened in February 2018. It was closed in January 2022. Plans are to reopened in May 2022 as The Vixen, a live music/live performance theatre.

Here is their official website. There is also a photo of the theatre on this page.

The entry for Chicago architect John van der Meulen in the 1962 American Architects Directory lists this 1955 theater among his works. Later in his career van der Meulen and his architectural partner Ralph Rapson became known for the American embassies they designed in various cities, including Stockholm, Copenhagen, and The Hague.

The McHenry Theater could still be a handsome Midcentury Modern building if they’d rip that shingled fake mansard and other accumulated bits of ticky-tacky off of it. It deserves better treatment than it’s had.

The Empire Theatre launched June 28, 1919 with “The Little Rowdy.” It closed for a month in January of 1929 to install a Vitaphone sound system re-opening Feb. 21, 1929 though sound films were still a month away.

I just read the downtown theater will be renovated and reopened hopefully in the fall. DC Cobbs restaurant will also be moving in next door!

Downtown McHenry movie house gets a gut rehab By Dan Moran Not every old movie theater is worth saving. Those of us who pinched pennies by watching the finest G-rated films of the 1990s on postage-stamp screens at The Dunes in Zion or the Belvidere Mall Cinema in Waukegan were a little sad to see them go, if not in a way that would require chaining oneself to the door to stop progress. But in an economic marketplace dominated by multiplexes that charge whatever it takes to cover the salary of a Mark Wahlberg — your highest-paid actor in 2017 at $68 million, according to Forbes, and that was for “Transformers: The Last Night” and “Daddy’s Home 2,” if you want to be really angry about it — it’s easy to root for a grassroots effort to restore a 20th century neighborhood movie house for use in the 21st century. That is the case just a short hop across the border of Lake and McHenry counties, where Scott Dehn of Golden Age Cinemas opened the doors last month on a renovated McHenry Downtown Theater. As area movie-going fans might already know, the Golden Age stable already included the Liberty 1 and 2 Theaters in Libertyville and the McHenry Outdoor Theatre (which is set to re-open on May 4 with “Avengers: Infinity War,” for those of you already sick of February). The indoor version when it comes to the McHenry nameplate sits on the west side of the Fox River on Green Street, and it has witnessed an on-again, off-again existence in the last generation or so. According to the invaluable website CinemaTreasures.org, the storefront location’s history as a movie theater dates back to 1919, and it operated as The Empire and The Colony before becoming the McHenry Theatre during the Boomer years. After joining and departing the umbrella of the Rhyan Management Co. — which ran everything from the Grayslake Outdoor to the aforementioned Dunes once upon a time — the McHenry gave it a go in the early 2000s as discount first-run venue. I remember taking the kids to see one of the many “X-Men” movies there in 2006 or so, and then trying to take them back to McHenry to see one of the many “Toy Story” movies, only to find it closed. Cinema Treasures reports that the last iteration of the McHenry Downtown closed shop in 2014, and a lot of smaller theaters simply don’t make it back from a slow death like that. But published reports last year revealed that Golden Age was tackling a $1.5 million rehab that would not only reopen the theater, but also expand it from two screens to three. The result was unveiled in mid-January, and I headed out early on a snowy Super Bowl Sunday to check it out with my youngest offspring in tow, since he had not seen “Jumanji: Welcome to the Jungle” and had heard mostly good things about it from the cynical middle-school crowd. The first surprise came upon walking inside: This had not been a wallpaper-and-paint makeover. This had been an extreme rehab. Brick and tile lined the walls of what had been a musty old building, if my memory from 2006 can be trusted. Entrances to three screening rooms — one with 175 seats, another with 155 and a smaller one set to debut with “Fifty Shades Freed” this weekend — were adorned with the names of local businesses that had backed the rebuild. Along the walls, posters for classic films like “The Empire Strikes Back” and “The Dark Knight” hinted at the past, while inside the theaters, wide recliners with immense legroom were lined up in tidy rows, as demanded by the current consumer. The stage was set to take in this updated version of “Jumanji,” which turned out to be an acceptable pregame diversion, and one that will no doubt demand another extension of the franchise, if $825 million in domestic box office still means anything. Speaking of box office dollars, this new-age McHenry Downtown Theater charges $9 for adults before 5:30 p.m. and $7 for matinees, children and seniors (aged 60 and older). Hot tip: That’s about $3 less than you’ll pay at the big-boxes, and two tickets at the discount rate almost covers a large, refillable popcorn. The rebirth of the McHenry Downtown follows the 2015 rehab-and-reopening of the Antioch Theatre, and if this is a trend, it’s a welcome one. For whatever reason, the aforementioned Waukegan and Zion are still waiting for the return of a first-run movie theater, and this should not stand. When it comes to experiencing a movie more than just seeing one, not everyone has surrendered to the Netflix culture.

As Of 1929, The Empire Theatre Was Operated By Warner Bros Management Circuit Until 1936. It Was Once Closed On September 14th, 1937 For New Equipment Being Installed And Was Reopened 2 Days Later. New Chairs Were Installed On May 26th, 1938.

The front wall only survived the fire on November 4, 1951.

The McHenry Downtown Theater closed in January of 2022. It will be opening next month as mixed-use live venue called The Vixen offering stand-up comedy, live music, bingo and other live entertainment (as well as two bar areas).

So does it mean that two of its screens will become its bar areas, and the other being the main auditorium?

Update: The Empire Theatre name lasted until April 1941. For a short time, it was renamed “Theatre In McHenry”. This lasted for nearly 6 months until it finally became the Colony Theatre in September of the same year.