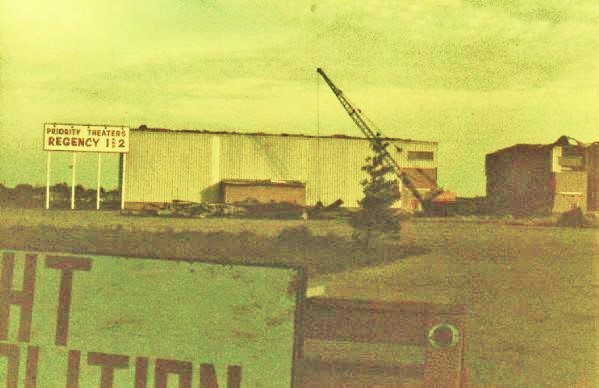 Opened adjacent to the South 31 Drive-In and operated by the same owners of the drive-in. The Regency 1 & 2 opened on November 10, 1965 with Michael Caine in “The Ipcress File” & Richard Widmark in “The Bedford Incident”. Total seating listed at 1,300. Each auditorium sat 650 in large and spacious surroundings. The architect was Everett Brown. The twin cinemas lasted until closing on January 27, 1983. The building and the drive-in were soon demolished. Burlington Coat Factory outlet now stands on the site.

The theatres didn’t close until the early 1980’s. They existed at least through early 1983 and possibly as late as 1985. The Regency and the South 31 Drive In were both demolished to make way for the Greenwood Point shopping center with Cub Foods locating on the Regency site. If someone can find out when Cub’s opened, that would be about 1 year after the Regency was closed and demolished.

The theatres had rocking chair seats.

The theatres were among the first in Indy with Dolby Stereo and also had frequently played films with Sensurround in the late 70’s and early 80’s. Rollercoaster and Battlestar Galactica (yes, it was released theatrically in 1980) both played in that format and were the last 2 sensurround films released if I remember correctly.

1971 aerial of the theatres and parking has been uploaded here.

It Actually Did Close In July 1985 According To The Indianapolis Star.

Joe Cantor and his Priority Theatres' South 31 Drive-In opened September 29, 1965. The adjoining Regency 1 & 2 opened less than two months later on November 10, 1965 with “The Ipcress File” and “The Bedford Incident.” Cantor had also opened the new Georgetown in August of 1965 and the Carlyle.

Land values increased near the Regency Indoor/Outdoor operation and, in 1983, Skinner and Broadbent had the buildings bulldozed in favor of a new-build shopping plaza, Greenwood Point and Greenwood Place. The hardtop twin theatre closed on January 27, 1983 but Priority Theatres said that the move was probably two years later than it should have been for the aging properties which had faced declining audiences.

Both structures were razed not long after the drive-in finished its final season. The South 31 Drive-In - with its massive 1,600 car lot - was only attracting about 100 cars nightly. The ozoner closed for the season on September 4, 1983 with “Time Riders,” “Hells Angels Forever,” and “The Rose.” A Cub Foods and later Burlington Coat Factory anchored the plaza that replaced the two movie venues.