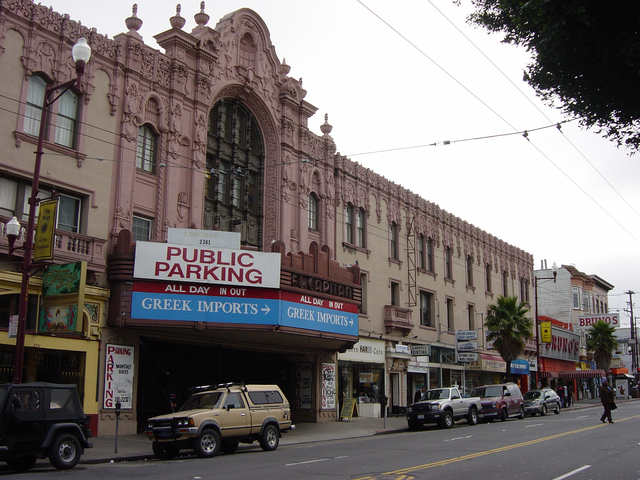 The El Capitan Theatre was built in 1928 for the Ackerman & Harris circuit, opening on June 29, 1928 with George Sidney in “We Americans”. This large 3,100-seat theatre in the Mission district offered a downtown stage and screen policy at neighborhood prices. It opened with 5-acts of vaudeville and Mel Hertz opening the 3 manual 11 ranks Wurlitzer (Style 235) pipe organ to accompany a silent film. The interior was a beautiful example of Spanish Colonial Revival architecture while the outside was built with a splendid Mexican Baroque facade. It later became part of the Fox West Coast Theatres chain and closed on December 15, 1957.

Although the auditorium is long gone, the facade and attached hotel still stand, with the Moderne style marquee standing guard over the entrance to the theatre’s new use as a barren parking lot.

The demolition of all but the decorative facade and the gutted foyer of the El Capitan Theatre in 1964, remains one of San Francisco’s major losses.

Wow. This theater looked beautiful. I wish we could see some more pictures of the interior. It’s a shame that it had to become a parking lot of all things.

At least they didn’t COMPLETELY destroy it. I’d rather see it become a drive through parking lot with the facade in tact than see it demolished and becoming a Walmart or something…

Vaudeville dancers at the El Capitan, 1932.

What remains of the El Capitan Theatre and Hotel was designated a San Francisco city landmark in 1996, which was unfortunately long after the auditorium had been demolished. A PDF of the Planning Commission document with the history of the building can be downloaded with this link. The document says that while G. Albert Lansburgh did in fact act as consulting architect on the project, the architect of record was William H. Crim.

Is the hotel building still used?

It’s still a hotel and even has a web site.

Not to be confused with that other el capitan theater which went by a different name..