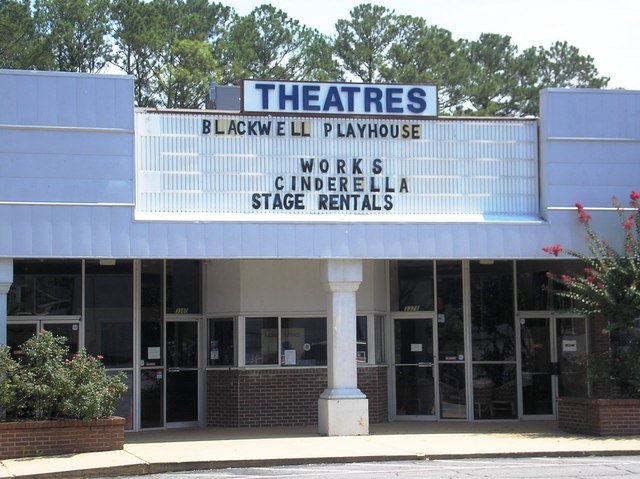 After serving most recently as a Spanish-language movie house, this theater is now home to the Blackwell Playhouse, a legitimate theater.

Was originally known as Canton Corners Theater and opened in the late 70’s as an independent. Was rumored to have innitally contracted as a Septum theater, but they dropped out. Got their first big break by booking Alien and did sell-out business. Shopping center changed names to Blackwell a few years later, so the theater changed as well. Original owner retired and sold out to a younger couple who ran it for quite a while. They later took over the Marietta Star Cinema/Town & Country after Lefont gave it up.

Closed and converted to a playhouse when I was by a few weeks ago.

Actually, the business was acquired from the “younger couple” in May, 2000, by G&S Entertainment, LLC. They are the ones who then acquired the Marietta Star Cinema from George Lefont. Having done that, they changed the name of the above theatre to Blackwell Star Cinema.

PS: I know this because I’m the “G” in “G&S”. When we bought the Blackwell, I was told that it had been the first twin theatre in the Atlanta metro area.

Well AlanATL, you takeover was seamless, never knew there was a change. Was that you on the recording when Marietta Star closed sending folks to Town Center when it was a discount house?

The takeover was indeed seamless. It took several weeks to work out all the contractual issues. We retained the same film booking agent and signed contracts with the major studios in advance. The sale to us was closed and the lease transfer was signed all on Thursday afternoon, May 11, 2000. The couple closed up after the last shows that night and then turned over the keys to the building. We opened up for the first shows the next afternoon.

It was likely my business partner, Don, who recorded that final telephone message. Also, I’m sure we referred you to the Marietta Star Cinema on Roswell Road, ½ mile east of the Big Chicken, where we were still operating as a discount house.

I remember calling the Marietta Star when it closed and being referred to the Town Center, not when Blackwell closed. The Blackwell was always so well run, a nice clean family sort of place, regardless of who operated it. Now for the Marietta location, there was a marked improvement once you took over from Lefont. I was always stunned at how slipshod it was run compared to all of his other locations. Once he was gone the experience improved dramatically.

This location was, I believe, opened by Mr. NormnSchneider in the mid 70s. In 1978 I paid my only visit to this location to see Dolby sound presentation of Star Wars. Mr. Schneider was a retired Altec sound engineer among the first generation to work in theater sound and had forgotten more about that business than most people would ever know. After his retirement he built this theater designing and constructing the sound and projection systems by hand. My one visit here was among the finest movie sound experiences I have ever had.