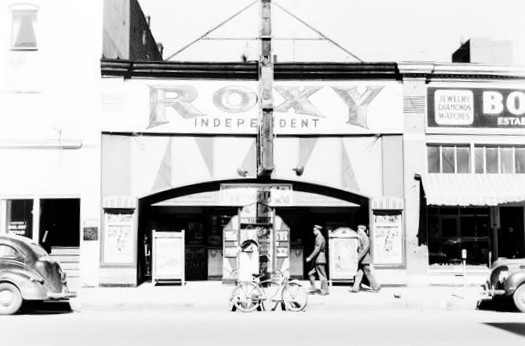 The Gem Theatre was opened in March of 1934. Muskogee, Oklahoma, apparently had two Roxy theatres. The link below is to a John Vachon 1942 print, from Library of Congress Photo Archives, of the Roxy Independent Theatre. It was destroyed by fire in 1945. The other one was known simply as Roxy Theatre, located at 220 W. Okmulgee Avenue.

Muskogee had two Roxy Theatres, the one listed here (420 seats), and another (1300 seats) located on Okmulgee St. Both were downtown cinemas.
View link
/theaters/8862/

Thanks for posting Seymour.

The building looks like it would have predated the name Roxy, which only came into use after the original Roxy Theatre in New York was opened in 1927. I suspect that the Roxy Independent was an older theater renamed, probably one of the four early theaters mentioned in the journal article the locations of which are not listed: the Gem, the Gaiety, the Wigwam, or the Merchant’s.

The Wigwam having been on Court Street certainly lets it out as an earlier name for the Roxy Independent.

But I’ve also found another puzzle. A 1928 item in MotionPicture News says that a house called the Strand Theatre had opened in Muskogee on September 30. I can find only one other reference to the Strand, in the 1929 Film Daily Yearbook, which said that the house had been sold to Cauhle and Perry.

I’m reluctant to submit the Strand to Cinema Treasures, as, with no address to go by, it might be an early name for one of the other theaters already listed and described as having opened in the 1930s (the Oklahoma and the Lyric.) Trade publications sometimes listed a theater as new when it was actually an old theater that had been reopened under a new name. In fact the 1928 Strand itself could have been an earlier theater reopened with a new name.

If the trade press is accurate, this was the location of of the Gem Theatre that launched in March of 1934 by V.E. Hamm. The theatre was totally unrelated to the 1908 Gem Theatre except that both were independently owned. Hamm’s Gem would bring suit against the operator of the Broadway, Ritz and Yale when the Yale lowered prices to counter the new Gem’s low admission prices. It also complained that the Bank Night that was shared by those three theaters was akin to a lottery. Hamm’s suits were dismissed and the theatre got new ownership and switched to the Roxy nameplate.

The competitor, P&M, then added the venue to its portfolio under the Roxy Theatre nameplate. The theatre was destroyed by fire in 1945. The operator wanted to rebuild quickly but war shortages slowed the plans. With the larger and aging nearby Lyric Theatre reaching its 40th anniversary, P&M decided that the New Roxy Theatre would supplant the Lyric after the War.

The new Roxy was constructed at 220 W. Okmulgee Avenue (which the local paper says was the site of the original Roxy Theatre, BTW) in 1947 before running into some delays including brick shortages delaying the New Roxy’s opening to 1948. The Lyric closed at the end of February of 1949 and its interior was dismantled to create a storage facility. The New Roxy continued into the 21st Century and has its own Cinema Treasures listing.