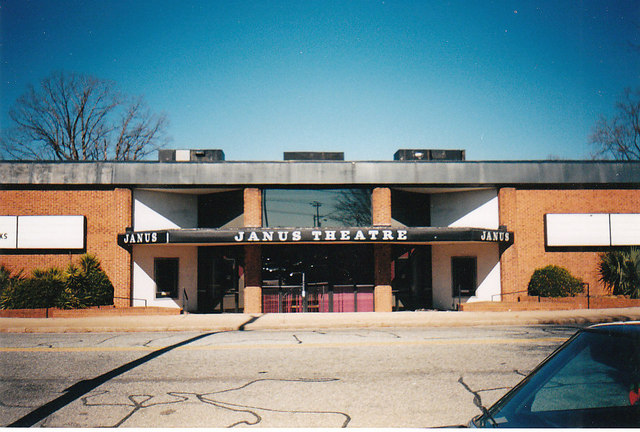 The Janus Theatres in Greensboro North Carolina opened its doors to the public on December 20, 1968 as a twin theatre. It was the South’s most elegant theatre and it was the second twin theatre to open in North Carolina. At the time of its opening the Janus 1 & 2 was one of the first modern ultra theatres in the South between Washington and Atlanta. to have full automated projection and stereophonic sound. The first films shown were “Yellow Submarine” and “Elvira Madigan”. By 1970 it expanded to four screens and by 1975 three more screens were added to expand to seven screens. By 1981, it eventually grew to eight screens and was Greensboro’s top entertainment showplace when it closed in 2000. It was demolished to make way for luxury condos and speciality shops. The Janus Theatres showed many first-run blockbusters and well as smaller independent and art films, as well as special features of interest.

Carprog: The Cinema Theater is listed on this site located on Tate Street near the UNC-G campus. I also saw “The Getaway” there around Christmas of 1972,first-run.

The Janus Theatres 1 & 2 was the South’s most elegant theatre when it opened on December 20,1968 as North Carolina’s second twin theatre after Charlotte’s Charlottetowne Mall Cinema 1 & 2 that opened in 1963.

These new back-to-back theatres are the first to open in the South between Washington and Atlanta to have full automated projection and stereophonic sound in both auditoriums. By 1970,it expanded to three screens and by 1975 four more screens were added when it expanded to seven screens. It became a eight-screen theatre by 1981. It closed in 2000 as the Janus 8.

It opened on December 20,1968 with the exclusive Eastern North Carolina engagement showing of “Yellow Submarine”,which was an animated cartoon featuring the voices of The Beatles.

The Coming Attractions for the Janus 1 & 2 were:

-Malcolm McDowell in Lindsay Anderson’s IF

After the Janus closed, the buildings were razed and the lot sat empty for over a decade. All that remained was the old parking lot until 2012, when First Citizens Bank built a fine looking branch at the location.

Star Wars opened at the Janus on June 17, 1977. In a (spoiler-rich!) review from that days Greensboro Daily News, staff writer Russ Edmonston, who had attended a special showing the night before, wrote, “The [Janus] management has installed a dolby-stereo [sic] sound system to enhance the sound effects of specially prepared film. It is the only theater so equipped in North Carolina.”

On a personal note, the Janus was the theater where I saw Star Wars for the first time in summer of 1977. When the Special Edition was released twenty years later, I saw Episode IV in the exact same auditorium. Great memories!

The Janus not only showed “STAR WARS:SPECIAL EDITION”

but the special editions of “THE EMPIRE STRIKES BACK” and “THE RETURN OF THE JEDI” too.

Other movies that got first-run exclusive billing:

ALIEN-where it played on 2 screens in DOLBY STEREO

“BACK TO THE FUTURE”

My favorite element of the Janus was the lighted hallways that led to the auditoriums. My friend and I would run up and down those halls pretending to be jumping into hyperspace. It was awesome.

Also that they let me get in to see the Abyss with my pockets obviously full of Andy Capp Hot Fries.