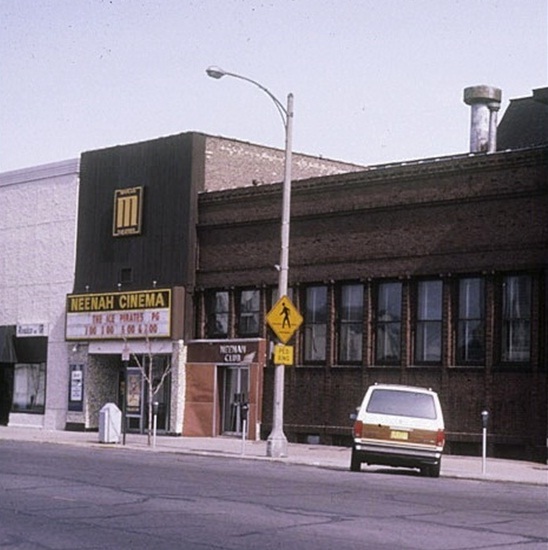 This theater was my childhood. Every Saturday afternoon during the summer, we went to the movies. Part of the fun was getting there: we would take the rail road tracks there, cross two bridges and cut through a paper mill. It was fun.

Some of the movies seen there were “Yellow Submarine”, “Kelly’s Heroes”, “House of Dark Shadows”, “The Fog”, “Vanishing Point”, and of course “Earthquake” and “Midway” in Sensurround.

It was a fantastic place and I was very saddened to hear that it was gone for an office tower.

I don’t have the picture anymore. There was a reason it was kept in a DARK auditorium…I do have the ushers stand. The papermaker carvings were taken out before demolition. I think they were headed to the paper hall of fame or something? Other than a nice piece of history, those seats were in pretty bad condition, love seats are cool though. I do have some pictures of the theatre, let me know if you’d like to copy them.

Yea I know at one time it was really nice to look at. The last time I saw it, it was in real bad shape. The seats were rebuilt and are great to look at and not to bad to sit in. 6 of them came from the balcony 8 from the main floor and 2 love seats. I saved the 3 black JuJu Bee’s that were stuck to them, They are in a box for now. The sensurround amp and speakers were rebuilt and work great. I also have the original RCA amp from the theater but it dosn’t work and is just a display. The pictures would be great, let me know what you need.

Are you still in the area? The pictures are before the digital camera age, so you would need to copy the pictures themselves if you wanted them. We could meet up sometime if you’re in the area, or I can send you pictures if you’re not. I have pictures of the auditorium, lobby, office, projection booth, exterior, Most are from 1995ish, however I also have some older ones, probably from the 70’s and I think I have an older one with a big marquee possibly. I wish I would have saved some seats, quite honestly at the time, I never wanted to see them again, but now of couse I would like them. Same thing with the Viking theatre in Appleton, I did have 10 seats from there, but got tired of moving them around and eventually got rid of them. In fact 3 of them went down with the Neenah theatre, because I had them in my office there. Let me know if you’re interested in pictures.

No I moved away in the 90’s. I live in Colorado Springs CO. If you click on my name and you can get my e-mail address. I would like to copy any of the pictures you are willing to send. I will get them back to you. I don’t want to leave my address here.

I used to go to the Neenah all the time as a kid. Sad to see it go. I do remember the city sky line and paper maker images. I sure would LOVE to get a set of them. Though I dont live in the area, my mom does. Does that count?

Here is an October 27, 1963 ad from the Appleton Post-Crescent:
http://tinyurl.com/admnmo

Does anyone know if the Neenah theater had a balcony back in the 1920s and if there were any other places in town to watch movies?

I have just listed two seats from the Neenah Theatre on Craigslist.

If you have any interest in preserving this icon of local history just contact me. My cell is 920 358-0044.

This was the theatre of my youth and had a lot of fun there.

The photo of his tombstone at Find a Grave shows that the correct spelling of architect Lovell’s first name is Sidney.

The University of Wisconsin Digital Collections has photos of the Neenah Theatre, but offers nothing resembling a working link, let alone a permalink, to any of them. Go to their web site and paste the following into the search box (with quotes included):

Three of the five photos the search fetches will be of the Neenah Theatre. The caption of one photo showing the house under construction in 1902 says that the first performance at the house took place on December 26, 1902.