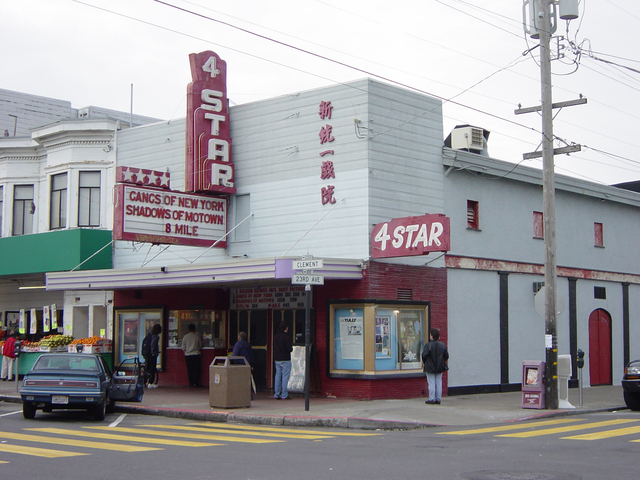 The former La Bonita Theatre has been close to closing many times since its birth in 1912. It was renamed 4-Star Theatre on February 3, 1946. Although any of its architectural character was long clapboarded over, the theatre has retained a simple Moderne marquee and vertical sign. Chinese characters have also been painted on the facade.

The theatre was the site of an eleven month run of “La Cage aux Folles” in 1979. Now twinned and showing mostly arthouse and foreign films, the 4-Star Theatre continues to struggle, but it is a survivor.

Excellent news! The Lees have won the fight to keep the theater! Acoording to today’s SF Chronicle, the church who owned the building agreed in mediation back in July to sell the property to the owners of the 4-Star, Frank & Lida Lee. They had 150 days to assemble the financing for the $1.45 million purchase price. On Wednedsay, Frank Lee said that they had beaten that deadline by a week and that the deal has cleared escrow & was finalized on Monday. Lee does plan to do some “long-planned renovations”. According to the attorney for the church (previous building owner), “With all the adverse publicity & politics, it would have been an uphill battle to build their church, so they bit the bullet & sold it, at an overall loss, to the Lees.” The article did mention that the Lees had enlisted the help of the San Francisco Neighborhood Theater Foundation.

Here is another view of the marquee:
http://tinyurl.com/3dcuj6

Here is an undated photo:
http://tinyurl.com/oy672o

I visited this theater yesterday and was a little disappointed. I was in the larger cinema, which is largely intact from its single-screen days. It was quite dark in there before the show. There was no curtain, or else it was open. There was some interesting decoration around the procenium, but with lack of stage lights, you could hardly see it. If a theater has no curtain, at least they could flood the screen with colored light to make the place more attractive.

Jack Tillmany’s history of the 4 Star (published in 2013) for the Western Neighborhoods Project on the OutsideLands website: