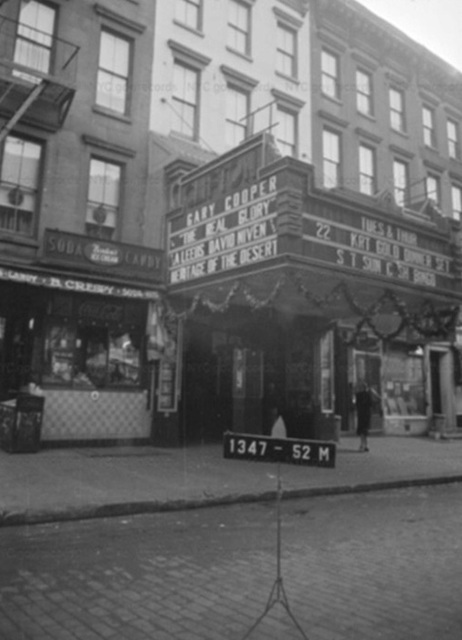 Situated on 2nd Avenue near E. 54th Street, this was one of Manhattan’s early cinemas, and originally known as the Pastime Theatre. Circa 1935-36, it was renovated and re-named the Clifton Theatre, with a policy of late-run double features changing several times per week.

The Pastime Theatre had a 2-manual, 4-rank Wurlitzer “Style B” organ (with piano-style console), Opus 1416 (1925). This organ was moved in 1935 to the Fordham Skating Rink in the Bronx, which would coincide with the ca. 1935-36 renovation and renaming of the theatre.

Disregard the above posting. Further research shows that the Wurlitzer was in the Pastime-Osborne Theatre in the Bronx. Does anyone know of this theatre’s location?

Point of fact, the standard style B Wurlitzer was not equipped with a “piano-style console”. The style B normally had a stock 2 manual “circular” console with 3 pistons per manual. There were around 225 style B organs built.

About the only real difference between a style B and a 135 was the console type and the fact that the style B had an extra 12 treble pipes for the 2' Flute Piccolo. There were probably some differences in the traps supplied, but those varied from instrument to instrument anyway.

Tom DeLay — I stand corrected. The Wurlitzer Style B had 2 Manuals – 4 Ranks – 3 Tuned Percussions – 17 Traps – Curved Console. Thanks for bringing this to my attention.

This is listed in the 1947 Film Daily Yearbook as the Knickerbocker.

“‘Naughty-Naught’ will open at the Old Knickerbocker Music Hall (Formerly the Clifton Theatre) on second avenue and fifty-fourth street.”

As “the Knick”, it seems to have been mixture of movies, theatre and cabaret from 1946 to around 1951 when it became abandoned. In 1958 when they looked into re-opening it as a club they found a colony of homeless women living there without heat or water.