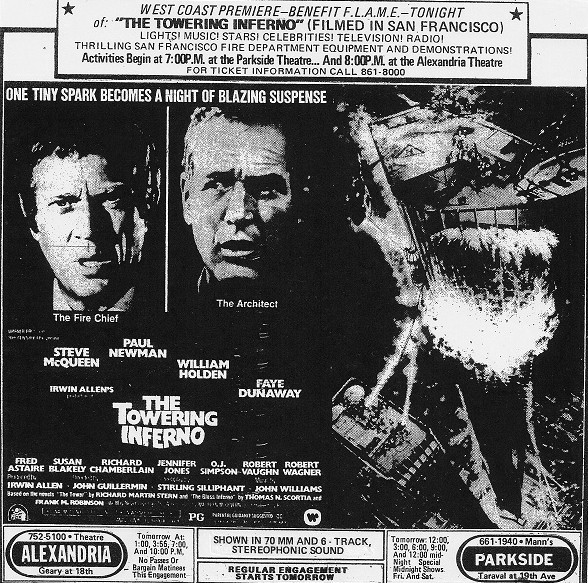 The Alexandria Theatre opened on November 26, 1923 with Douglas MacLean in “Going Up.” It was built at a cost of $350,000 by Oppenheimer & (Alex) Levin; Reid Brothers were the architects. From the beginning, it was one of the Richmond district’s leading second-run theaters.

In 1941, it underwent extensive remodeling, emerging totally Moderne, with only the original stone pillars on its corner facade still exhibiting evidence of its original Egyptian roots.

On November 24, 1976, it re-opened as Alexandria 3, with the former balcony and loge sections converted into two separate, smaller auditoriums, but with the original downstairs section more or less intact.

Beneath the remodelling, rumor has it that the original dome and atmospheric ceiling still exists, retaining it’s twinkling lights, or at least the sockets, and that behind the bland walls of the lobby one can still see lotus-topped columns and colorful hieroglyphics.

The theater closed in the beginning of 2004 and its future is uncertain.

Thanks for the new info, I’ll take a closer look!

What an absolute disgrace and such disrespect for a beautiful old theatre…..

Boxoffice of June 9, 1958, reported that renovations at the Alexandria Theatre, including the installation of the Todd-AO screen and projection equipment for the upcoming road show run of South Pacific, had reduced the seating capacity of the house to 1,250.

Apparently it’s a new aquatic center for the Alexandria Condominiums that were either just opened or are about to. http://thealexandriasf.com/

Sorry I was incorrect on one point, its for the public, not just the condos. Kind of a strange pairing – swimming pool in the middle of an old theatre – but at least they didn’t tear it down and it will have new life!

OMG. Certain architectural features inside would remain. Not sure what is meant by 1976 marquee that will be removed.

From the above linked 2016 RichmondSFBlog article it sounds like the box office, marquee and blade will all be retained. The “1976 marquee” referred I believe is the “1-2-3” on each side of the blade tower that was added in 1976 when the theatre was triplexed. Nice that they will retain the upper portions of the side walls for the 3rd floor offices.

From Frank Dunnigan’s Feb 2018 article on SF Theaters that appeared on outsidelands.org: