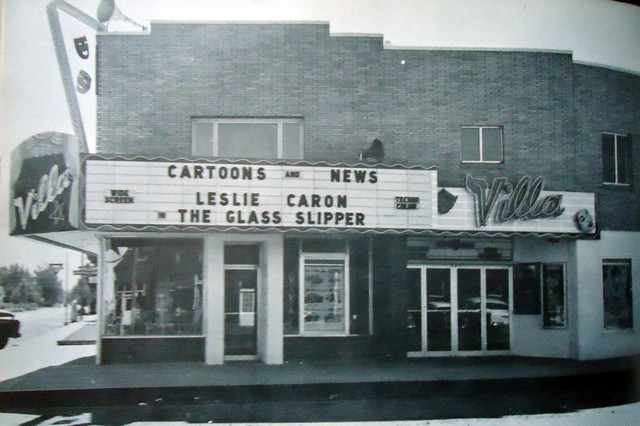 The Villa Theatre is located in the downtown section of Malta, serving a population of over 8,000 in the county.

The Villa Theatre opened on June 30, 1955 with 500 seats (450 in the orchestra and 50 in the balcony), and has a corner entrance with a three sided marquee and small vertical.

In late-2013 fundraising was continuing to purchase a digital projector, but the Villa Theatre appears to have closed by 2014.

The Villa Theatre was re-opened on November 8, 2019 following a complete remodel. It is operated as an independent theatre by David Adams & Greg Kirkwood.

Not a bad looking theatre.

There are no current listings for this theater at any of the movie web sites, and the house doesn’t appear in the Great Falls Tribune’s movie listings. It must have been closed.

Here is a fresh link to the article about the Villa Theatre in Boxoffice, March 3, 1958.

Thanks for the boxoffice link Joe V.Nice looking theatre.

There was a Richard Canfield “Dick” Pancake, raised in Malta, MT. He might be “R.C. Pancake”. Leslie George Pancake owned and operated the Cinema Inn theatre in Shasta Lake. I found a reference to a remodel done to the theatre in 1968.

This theater is not closed! We are fundraising to save it. It has already upgraded to digital sound & has half the money for the remaining digital upgrades needed. To donate contact First Security Bank (406) 654-2221 or mail a check to them at PO box 730 Malta Montana 59538. Checks should be payable to Villa Digital Fund. Thanks to all who help!

The theatres phone number is no longer in service.

I don’t see how a theatre could still be open without a phone. YELP lists the theatre as closed.

The local paper lists June 30, 1955 as the opening date of the theatre

Boxoffice, Jun 13, 1977: “Mrs. Irene Veseth, Malta, Mont., has announced the sale of the Villa Theatre and Villa Drive-In of Malta to her brother R. C. Pancake. Mrs. Veseth has been associated in the operation of the Malta theaters for 49 years. Veseth Theatres was originated in 1922 by Mrs. Veseth’s husband Carl, who died in 1975.”