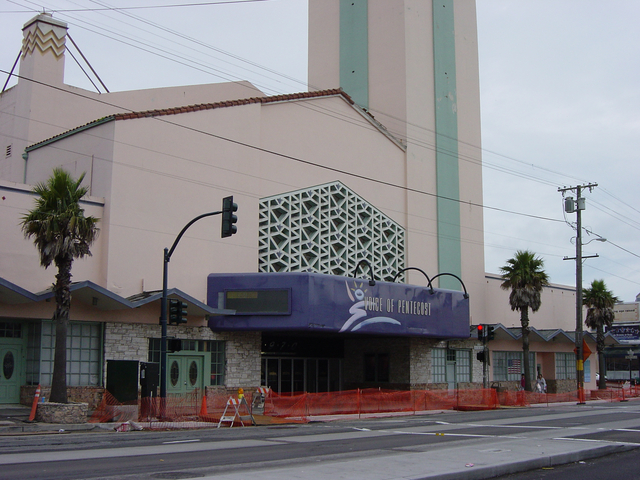 The El Rey Theatre was opened on November 14, 1931 with “The Smiling Lieutenant”, starring Maurice Chevalier.

Designed by Timothy L. Pfleuger, who is best known for his work on the Paramount Theatre in Oakland and the Castro Theatre, San Francisco. Following closure as a movie theatre on April 1, 1977 the El Rey Theatre became a church. The church vacated the building in 2015 following bankruptcy. It was sold to developers in 2017 for $1.06 million. Plans are to restore the theatre and construct 42 condominiums on top of the adjoining retail units. The El Rey Theatre was designated a Landmark building in July 2017.

I visited this theater back in the mid-70’s. At the time United Artists booked the place with B movies week in and week out. On
their big screen was a recent exploitation picture called THE DEVILS RAIN
starring Ernest Borgnine. I recall seeing only about ten patrons
sitting in that big, beautiful house.

El Rey’s status should probably list “Closed,” rather than “Open.”

The El Rey, located on Ocean avenue, was a beautiful theatre. The mitchell brothers rented it out and showed their premiere screening of “Autobiography of a Flea” complete with champagne and blotter acid. Before it became the Church of the Pentecost, Margo St. James of Coyote, had a week long film festival about prostitution worldwide. Magnificent films were shown there. Patronage was terrible. The interior layout of the theatre is exactly the same as the Alameda Theatre, as both were built by Timothy Pfluger, but the artwork was entirely different. If you are ever in the area, the congregation is very friendly and will let you walk around. Still a beautiful theatre!

Interior and exterior photos on this site:
http://tinyurl.com/8nhfnq

There were retail spaces in this building on both sides of the entrance to the theater. In 1969 The Gap opened its first store in the easternmost retail space just to the right of the theater entrance at the corner of Ocean Ave and Fairfield Way. A picture is here:
http://www.gapinc.com/public/About/about.shtml
You can see a portion the theater’s tower in the background.

Back in the early seventies, a friend and I saw a “Planet of the Apes” marathon there.

@lostmemory thanks for posting the 1970 photo. I remember seeing B&C&Ted&Alice at the El Rey at that time. It was a beautiful theater. I also remember seeing “Bikini Beach” there in 1964. The stars John Ashley, Mary Hughes and Candy Johnson were in the lobby signing autographed publicity photos. Wish I still had them.

From this morning’s SF Chronicle. The link to the article is below.

“The buyer was a joint venture between Ricci Ventures and Green Point Land Co., both Marin investment groups. Plans for the building are not yet firm. Project architect John Goldman said the overriding goal is to restore the tower and theater to their original splendor. He said the owners would like to lease it to a theater group and have reached out to San Francisco State University and City College of San Francisco, both nearby. Neither institution has expressed interest to date. Goldman described himself as a longtime Pflueger buff and former board member of the Art Deco Society of California. He said the owners have to figure out a way to make the venture profitable, but that they are committed to rehabbing its historic fabric. “If anyone is worried about my respecting the building — don’t be,” he said. “I love the building. The owners love the building. And we’re going to do right by the building. My goal is to figure out how to restore it.”

“As envisioned, the existing facade of the theater and its commercial spaces would be restored along with the theater space itself and lobby, using a recovered set of Timothy Pflueger’s original construction documents for direction.