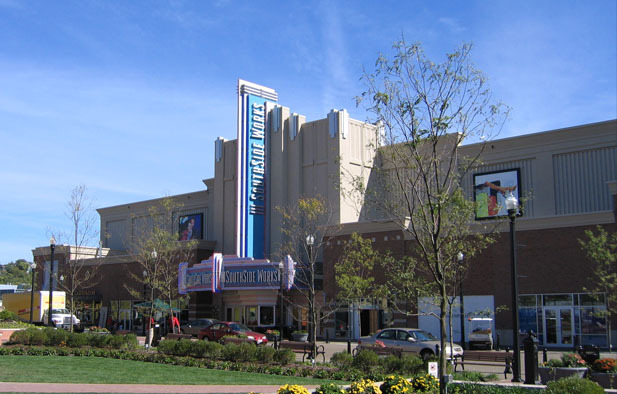 Opened in 2004, SouthSide Works Cinema was a ten screen theater that showed first run movies on seven of its screens and art or foreign movies on the other three screens. It was closed on March 9, 2020 to be converted into office space.

I rode by there for the first time this evening and I love the classic look of the marquee outside! Beautiful exterior! I haven’t been inside yet though.

I recently saw “Poseidon” there. The interior isn’t as spectacular, but they have these huge steps to get up to the theaters on the top level. This really bugged me because this didn’t seem to be handicap accessible. I couldn’t find an elevator anywhere!

The elevators are under the staircase on the main floor. You have to either know where they are, or ask at the desk.

I love this theater. It’s not as in your face as Lowes, and something about it (I think it’s the huge staircase) reminds me of older theaters.

The marquee and exterior are wonderful. The interior is considerably more plain. Still, it’s a good place to see a show.

Is this cinema independently owned or is it part of a chain?

SouthSide Works Cinema appears to still be operated by Cleveland Cinemas, a small, regional chain which took over in 2006, two years after the house opened. SouthSide Works Cinema is mentioned on this page of their web site. It is not included in the site’s movie listings section (probably because all the chain’s other theaters are in or near Cleveland or Akron,) but that page has a link to the SouthSide Works' own web page.

The building is owned by the Stoffer Organization, developers of the entire SouthSide Works project. The current general manager of the cinema is named George Petrus.

As Of March 9th, 2020, The SouthSide Works Cinema Will Close Its Doors, And Convert Into Office Space Soon According To WTAE Channel 4.