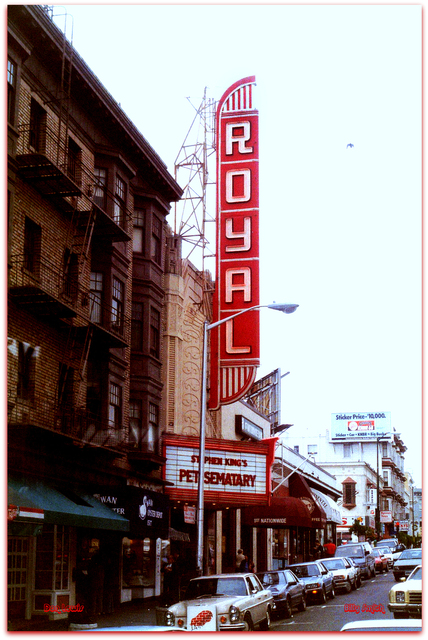 The Royal Theatre was built in 1916, designed by the Reid Brothers. It was completely remodeled by Timothy Plfueger during the mid-1930’s for the Nasser Brothers chain which operated it at the time.

Sitting on a stretch of Polk Street that became run-down as time passed, the theater’s vertical sign was a local landmark. The same decorative motif was gracefully applied to the facade and the organ grilles. The family that owned this theater also owned the Castro Theatre and the nearby Alhambra Theatre.

The Royal Theatre was demolished in June of 2003 except for the facade and certain architectural elements, which was incorporated into housing constructed on the site.

SAN FRANCISCO, June 1, 1930 —(A/P)— A blast, believed by police to have been caused by dynamite, early today tore off part of the roof of the Royal theater, residential district motion picture house of the T. & D. circuit on Polk near California street. No one was injured. The explosion aroused the neighborhood for blocks and sent fire apparatus and police to the theater. A hole five feet across was found torn in the roof directly above the projection room. Police said the blast might have resulted from recent labor disputes.

The Royal Theatre became a Blumenfeld property in the mid-1980s. The new operator refurbished the theatre at a cost of about $250K, and the place looked and smelled great, especially its huge lobby. Ed Lowelling (who reportedly died some time ago), who ran the Royal, was one of the best movie theatre managers in the Bay Area; the sad thing was the Royal’s location in the seediest stretch of Polk Street. Blumenfeld was unwilling to book the best movies into the Royal because so many moviegoers avoided that neighborhood due to its abundance of litter, homeless people and prostitutes (the Regency 1 got the Blumenfeld blockbusters). Due its unpopular status, the Royal mostly sat nearly empty and therefore always looked brand new.

It’s such a shame like so many torn down SF theatres they did not leave the giant red Royal neon sign on the front of the building when they turned the cinema into condos.

For years this theater ran every James Bond film on the first day it opened. The manager had a little white poodle and the floors of the theater were covered in sticky soda residue while the ceiling was covered with hundreds, if not thousands of Mason Dots that people woul chew and through up to the ceiling. I saw every Bond film there hen it opened from 1964-1980.

O.K., so the Royal was demolished in 6/2003; does anyone know when Blumenfeld pulled out? I worked there as an assistant manager in the mid-1980s (Bob Blumenfeld was the STINGIEST boss I’d ever had!) and I’m wondering when Ed Lowelling and Russell Burke left.

Perhaps my mind has gone bonkers but after I arrived here in 1976 it seems to me that in addition to its very sticky floors, that the screen had been placed at the back wall of the stage as everything else had been removed and this was the only way they could get a screen of the proper Cinemascope dimensions to fit.

Odd that the photo of the Royal shows Pet Sematary on the marquee and a new Pet Sematary has just been released. The theaters disappear but the product keeps being reinvented.

Actually the screen was in front of the stage. There was a wall backstage that people had been signing for years. On the left hand side you could go under the stage.

Eddie died in I believe in 1992, Russell worked there until the end. I was hired by Eddie, and worked as the assistant Manager until it closed.

I lived in the neighborhood in the 90’s. For some reason this wasn’t a regular movie stop for me. I did see “Blues Brothers 2000” there in Feb. 1998 right before it closed. There were only a couple other people in the theater and they were smoking cigarettes!