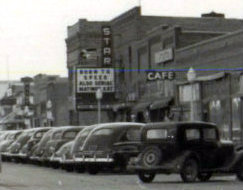 The Imperial Theatre was opened prior to 1925. It was renamed Star Theatre in the late-1930’s. It reverted back to the Imperial Theatre named in the late-1950’s. It is owned and operated by the City of Imperial. The projectionist is the only paid employee, the rest of the staff are volunteers. Movies are played on Fridays, Saturdays, and Sundays. The theatre is also available for recitals, and live performances.

The April 2, 1959, issue of Motion Picture Daily reported that W. Kinder, owner of the Star Theatre in Imperial, Nebraska, had affiliated his house with Allied Rocky Mountain Independent Theatres, Inc.. The move must not have helped business enough, as the Star soon closed. But the October 5, 1960, issue of the same journal reported that the theater had been re-opened under new management:

“IMPERIAL, Neb., Oct 4. – The importance of a theatre to a small town is illustrated by the re-opening of the Star Theatre here.

“All merchants in the small community experienced a slump in business when the Star shuttered several months ago.

“Merchants organized the Imperial Businessmens Association and raised sufficient funds to reopen the theatre. Newton Lippitt is acting as manager.”

The March 21, 1960 issue of BoxOffice reported the theater’s (temporary) closure as the Star: “The Star at Imperial, Neb., managed by W. H. ‘Rusty’ Kinder, has been forced to close due to poor business.”