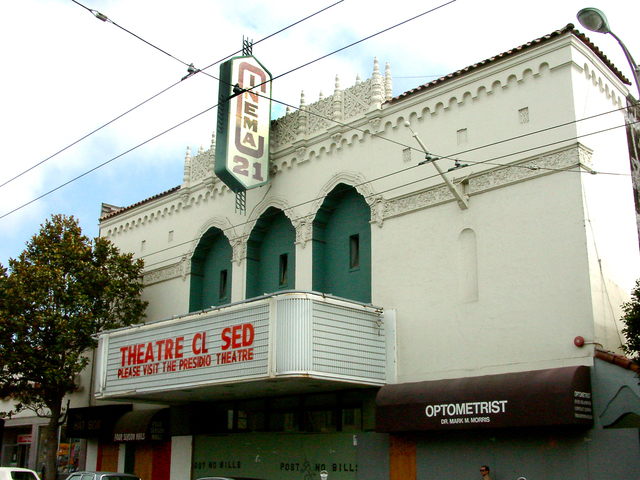 Built on the site of the Panama International Exhibition. The Marina Theatre opened September 21, 1928, as a second run movie house. The theatre’s exterior was an elegant Moorish creation. Seating was provided for 1,050 on a stadium plan. In February 1952, the theatre was extensively remodeled to the plans of architect Vincent G. Raney, with little of the original design remaining on the exterior or interior.

On December 23, 1965 the Marina Theatre was renamed Cinema 21 and changed from second run films to showcase first run movies. Here were the exclusive runs of “Who’s Afraid of Virginia Wolf”, “Rosemary’s Baby” and the reserved seat roadshow attraction of “Hello Dolly” in the 1960’s. As multiplexes rose in San Francisco, first run films were no longer exclusive to the Cinema 21 and the theatre closed September 20, 2001. The Cinema 21 was the last theatre in San Francisco to retain its original organ (The current Wurlitzer organ in the Castro Theatre was installed there in 1982, replacing the original Conn organ).

Frank Lee, who reopened the Presidio Theatre across the street, made arrangements to reopen the newly renamed Marina Theatre. Ground floor has become a pharmacy. On its former balcony level, a 264 seat stadium seated large auditorium, and a 86 seat screening room have been created. The Marina Theatre reopened May 2, 2008 with “Ironman” showing in the large screen.

A group of us went the day it opened and IronMan was on the bill. The bigger theatre up stairs is very small. No curtains and the worst part you enter the Cinema from the screen right. So when the previews are on you see everyone who comes into the theatre plus the light from the lobby. I told the Lee’s about this problem and sugg ested they put a small curtain to block the door from being scene from every one in the theatre. Also they have boring white lights above the screen. They reflect on the screen when the previews are on. I told them if they don’t have a curtain put in some blue lights above the screen so when you come in you don’t look at a white screen. The Dolby DigitalÂ® sound was good, but the projector was loud. I did not go into the tiny cinema across from the main theatre. Has anyone been to this theatre in the last few weeks. Did they add color lights to the screen or block the door view with a small curtain? I can’t believe the Lee’s ran the same movie ‘Sex City’ at the other theatre they run just a few blocks from the new Marina. Turn the Marina into a small art type cinema. Give Landmark Theatres in SF some competition. At least the Marina is larger then the small Opera Plaza Landmark shoebox. Good Luck to the Lee’s!

I don’t know how you can consider a 260 seat theater “small”.
Yes, it’s not the Paramount or Castro, but more than adequate for that neighborhood, and the screen size is proportionate to the auditorium.

As with any business opening, there were some less-than perfect temporary compromises that were made in order to meet promised opening day dates. Almost all these issues and a few you didn’t mention, have been addressed and corrected by now.

The auditorium entranceway has been re-done to eliminate the light leakage. A curtain was always in the plans, but not possible to have in place by opening day.

A screen curtain would have been nice, but when is the last time you saw a curtain installed in ANY new theater? A simple curtain installation can cost a minimum of $15,000 these days and most cost twice that much.

The lighting above the screen has been changed to include colored lights.

It was not possible to have the projection ports sealed by opening week, which is why there was some sound leakage from the booth. This has since been resolved.

As for the comment about the â€œlinoleumâ€ flooring in the theaters someone made- – The area in front of the screen area and all the aisles are carpeted. The seating area under the seats is covered with acoustically neutral (for the Dolby sound) artificial wood-finish tile flooring. No theater in their right mind would have carpeting in the seating areas due to beverage spills, drunk teenagers puke-ing, etc. Go to to any theater and find ONE with carpeting under the seats.

The Leeâ€™s did an excellent job on this project, given the physical space and budget they had to work with.

Or would have preferred they put another Starbucks there?

Jim**Thanks for the up date. I will go visit the Marina Theatre again and check out some of my suggestions I made to the Lee’s. Glad they made the adjustments. Now when the Walgreens downstairs goes bust the Lee’s can take over the whole building and put in a grand BIG Marina Theatre under the two they run upstairs.

I believe it is also a single screen — not a twin.

Scott, the Marina is a twin screen theater.
Lee

Interesting news about this theatre. Good it still exists anyway. Time marches on. Few new theatres have elaborate curtains over the screens that are used anymore. Presentation is not considered. Example of a newer theatre that installed a new elegant waterfall curtain is the Majestic Bay Theatre in Seattle. Stadium seating, handmade crystal lighting and elegant presentation. Carpeting under the seats would be the 5th Avenue Theatre in Seattle. An elaborate 1920’s movie palace restored in the 1980’s. Check them out. Just saying. LOL.

Exterior and lobby photos from July 2015.