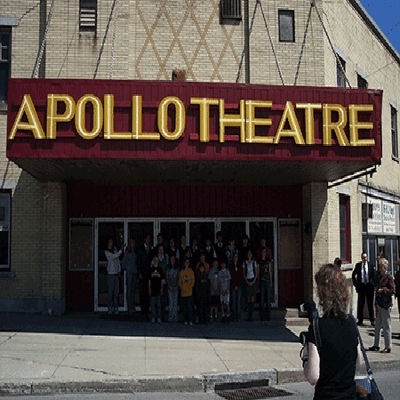 The St. Mary’s Theatre was opened November 1, 1928 with Joan Crawford in “Our Dancing Daughters”. In 1932 it was taken over by the Harris Amusement Company, and they operated the theatre until 1961. It became the St. Mary’s Concert Theatre until the mid-1970’s.

It was twinned in 1982. It was renamed Diamond Theatre in 1988 and was renamed Apollo Theatre in February 2009, when it was refurbished and remodelled.

This theatre is in aprett cool town. It has 2 screens but needs tons of work. New seats,new screens,new lobby and ticket booth. Sound system and booth need total make overs.
But the theatre still packs them in on the weekend!Cool pics here: http://www.cinematour.com/tour/us/7012.html

This theater is now called the Apollo Theatre. It’s totally renovated from the previous photos. It has a lot of charm now. There is plenty of history there that is now on display. It used to be a grand theater that hosted films and vaudeville shows. Although now it is cut into two separate theaters, the stage and mezzanine still exist under the current architecture. The original box office is now on display and being used. Check the place out!
http://www.apolloofstmarys.com/