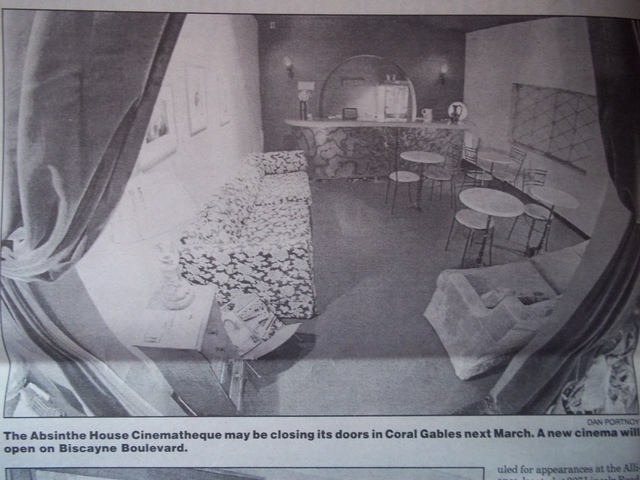 The Merry-Go-Round Playhouse was operating as an adult movie theatre until December 5, 1973 when it became the Merry-Go-Round Cinematheque, with a screening of Francois Truffaut’s “The 400 Blows”. It was South Florida’s premiere arthouse in the 1980’s and 1990’s and was created by Nat Chediak out of what had originally been a small children’s theater. Airplane style seats and great sight lines combined with some of the best movie released in two decades made this location an oasis of international cinema that took up where the Mayfair Theatre and Sunset Theatre left off. From this tiny house grew the Miami Film Festival and the rebirth of Latin Cinema in the U.S.

The Cinematheque introduced Fassbinder, Amodovar, Saura, Wajda, Guiterrez Alea, and Herzog to Miami film-goers. It was closed in the 2000’s.

Also known as the Merry Go Round as both theatre and cinema.

No showtimes anywhere, is this closed?

I believe I saw all of the “missing” Hitchcock’s there in 83 or 84, just after their initial rereleases. My first viewing of “Rear Window” – I’ll never forget it.

I’m not sure whether this is the Cinematheque where I saw foreign movies in the late 70’s. There was no absinthe then.

Where is it in the above photograph?

In the above Google Street View image The Absinthe House was in the part of the grey building that now says “ADC”.

At the time, as I remember, there may have been more open space with some plants where the window below the red awning is now, and the building was all red brick. … I walked by recently and only the shape of the building and entrance look the same, with seemingly nothing left of the theater on the inside.

The first time I visited in the mid 1990’s it was called the Alcazar Cinematheque. The entrance was at the end of the hallway that you can see flanked by plants in the Street View image. The front door resembled the front door to a house. A middle aged Latin American man to whom I paid admission was standing in a little rectangular opening just inside the front door on the right. Next to this ticket window was an open doorway to a room with a concession stand and some seating. If you walked straight a few feet instead of entering the room you would have reached the doors to the auditorium.

The next time I visited a couple years later it was the Absinthe House Cinematheque run by two guys in their 20’s, Johnny and Cesar. The ticket window/smaller concession stand was now next to the doors to the auditorium. The room where the concession stand had been was now reconceived by the guys into a space with couches, film posters, subdued lighting, multi-colored walls, and an artsy living room/den-type vibe. The rest of the lobby was a maroon/brick colored hue.

A few times I hung out in the artsy room after seeing a film and got to know the guys a little bit.… Once the projectionist, a middle aged man who spoke little English, sat there with us. He and I smiled at each other and I said he reminds me of the projectionist depicted in the Italian film “Cinema Paradiso”. Johnny understood I was referring to the man’s dedication and not just appearance, and translated what I had said for him. They exchanged a few sentences, then Johnny looked at me, and seemingly moved, said “That’s a compliment, man”.

On a later night, closer to the time the Absinthe closed for good, I recall a full house, perhaps for “Crouching Tiger, Hidden Dragon”. Cesar spoke to the crowd before the film, thanking them for their support. As he exited up the aisle for the start of the show, some of his friends in the audience chanted “Hail, Cesar!”, in appreciation of the work the guys were doing to keep the place running.

Before the Absinthe closed, the guys opened the Mercury Cinema (later renamed Soyka) with a third guy, Ray, which was named Best Art Cinema by the Miami New Times in 2001 before it closed in 2003.

A Miami New Times article from August 6th, 1998: “The Intoxicating Absinthe”, about the opening of the Absinthe and its transition from being the Alcazar.

A Miami New Times article from July 1st 1999: “Off Camera”, about the then impending closing of the Absinthe, which was then delayed another year or so.

For a time the comedy troupe Just the Funny put on their performances in the space. The Absinthe House Cinematheque logo, with a depiction of perhaps a European-looking black cat, can be seen on this page about the troupe’s history.

Nat Chediak, who as mentioned above originally started the Miami Film Festival at this location, is now the nearby Coral Gables Art Cinema Director of Programming: “You’re Never Too Young or Old to Love Film” 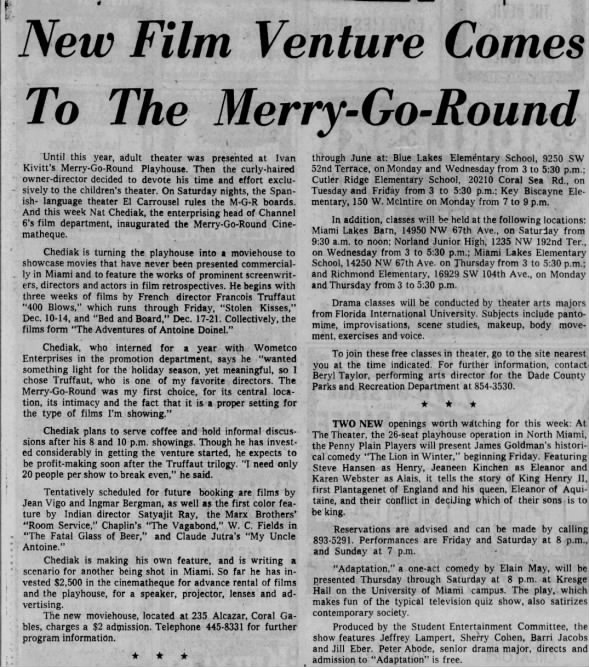 Thanks rivest266 for posting the above article about Nat Chediak. I knew of him from when I volunteered with the Miami Film Festival in the early 90’s and had heard that his career grew from this location, but now this article provides some early details and a sense of what the experience was like in the beginning.

Perhaps the Merry-Go-Round has come full circle. : ) This year, about three blocks south, the Coral Gables Art Cinema is holding a monthly program, “The Films of My Life”, described on its website:

“In 2020 CGAC Director of Programming Nat Chediak, dean of South Florida film exhibitors and founder of the Miami Film Festival, celebrates his 50th anniversary in Film. CGAC kicks off the festivities with a year-long series of films from around the world that have shaped his unique sensibility for the medium. Mr. Chediak will be on hand to introduce the films and engage the audience in conversation. Nat welcomes the opportunity to meet friends old and new and envisions the program as a golden opportunity to share with us his passion for Film in what is sure to be, indirectly, an ongoing master class in Film Appreciation.”