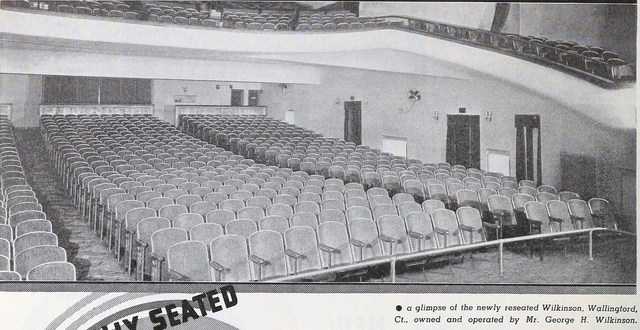 The Wilkinson Theater was a marvellous old vaudeville theater that opened in 1923, and converted to movies well before my time. It was located on Center Street near Simpson Court and the town center. Unfortunately, it was torn down in the 1960s to make way for the Dime Saving Bank’s parking lot and drive-up teller.

The theater had a broad, deep balcony where the older teenagers would neck and throw candy down on the younger kids below. The walls were hand painted with gorgeous birch trees and long v-tailed swallows. There was a pit for orchestra in front of the stage, and there were deep red velvet curtains that would open for the movie and close at the end.

I remember going for Saturday matinees where you could watch a whole slew of cartoons and a feature for .25 in the early-1960s. Just before school one year, they handed out Mickey Mouse pencil boxes with a pencil, smaller ruler, eraser inside the cardboard box with a small drawer and a picture of Mickey and friends on the front cover. It was closed in May 1967.

does anyone know where I could see old pictures of this place?

Try the Wallingford Public Library. Either microfilm or those series of books titled “Images of America”. Sometimes they show cinemas in a scene.

Thanks, ill let you know how I made out

The March 18, 1922, issue of trade journal Domestic Engineering said that George H. Wilkinson of Wallingford was having plans prepared for a theater to be built on Center Street. The architect for the project was Loomis J. Thompson. Thompson later designed the Capitol Theatre in Watertown as well.

Thank you for the memories! I also received the pencil box before school started. I believe they closed down shortly after that. Miss that place. Was beautiful to me even though I was only 5 years old!

o December 1921 fires in Connecticut theatres led officials to close Wallingford’s church turned theatre which suffered one of the State’s two fires. The officials also closed the George H. Wilkinson-headed Wallingford Opera House Which served as its other movie venue. Closed due to lack of fire escapes in the multi-leveled seating auditorium that was on the third and fourth floor of the structure, Wilkinson had this facility drawn up in 1922. The Wilkinson Theatre opened in 1923 and was transitioned to sound by decade’s end. Wilkinson died in 1939 leaving his son in charge which he did for nearly 30 more years.

Wallingford’s own Morton Downey appeared live on the Wilkinson stage as part of the “Camel Hour” in the 1940s. During the war, Wilkinson acquired the Strand Theatre temporarily renaming it the Victory. Wilkinson operated both theaters until closing the Strand/Victory in 1954. In 1955, Wilkinson transformed his remaining theater to widescreen for the purpose of displaying CinemaScope films.

The Wilkinson Theater was closed in May of 1967 after just over 45 years of operation as he retired selling the theater to the Dime Bank. The bank tore down the theater to expand its downtown operation.