And reopened by George Lefort as the Ansley on December 24th, 1982 Ad in photo section. 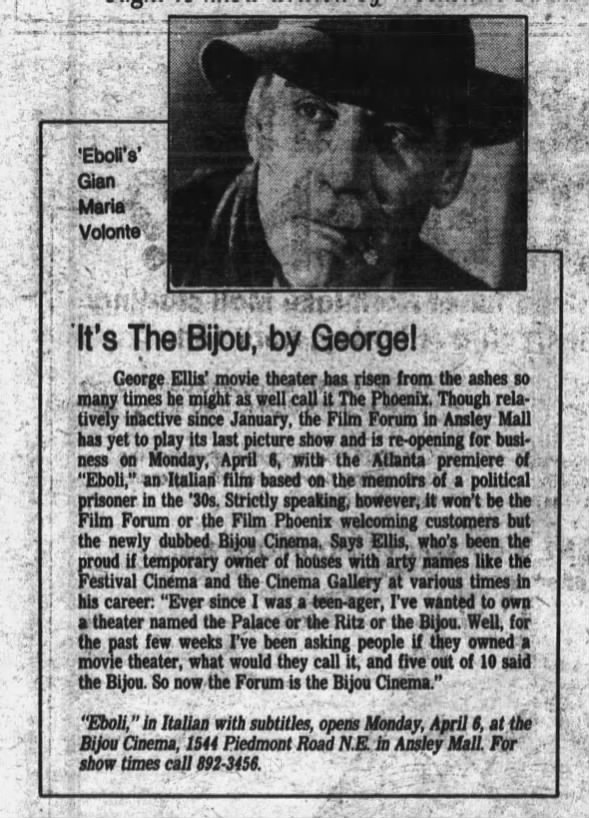 This and the Peachtree Battle minicinema opened on April 5th, 1968. 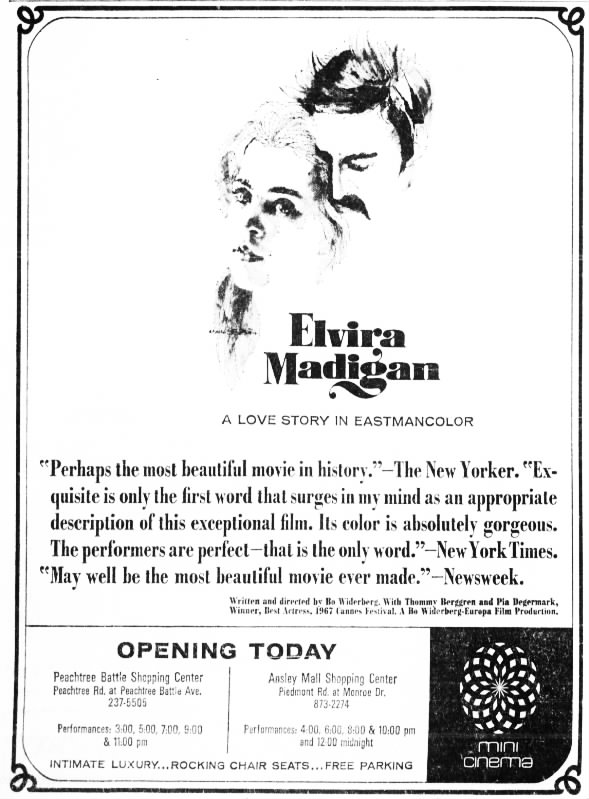 I was a friend of George Ellis and George Macrenaris, who also worked at the Film Forum (and may have been Ellis' silent partner). On May 1, 1982, I had a baby girl. The Film Forum had a “crying room” for babies and parents. My baby girl, Helen and I went to the movies every week, at least once a week, and sat quietly in the “crying room” probably through August or September of 1982. The two Georges grew to love my baby girl. In December of 1982, George Ellis was at a Christmas caroling party with my husband, my daughter, and I and his big bass voice charmed Helen Marie to sleep as he sang Christmas carols at the home of Mary Nelle and Dante Santacroce. The theater was still showing films, with Macrenaris running it, when my son was born in September of 1983. I think that is when it closed. I thought of buying it and showing children’s movies, but the informal survey I took of women with children indicated that they would not let their children go to the movies in what they called the “gay shopping center.”

I know that the Film Forum at Ansley Mall was open at least as late as 1980 into 1981, when I lived within walking distance and watched many films there during that time period, odd selections of foriegn films and cultish works, some offbeat comedies. One that sticks with me over 39 years later I viewed there was one film by Bunuel (I don’t remember the title this morning) back around 1980 or early 1981 in a small movie theater. Really enjoyed it, it made me think of a long Twilight Zone episode. I do think that not far into 1981 the theater suddenly was closed and never opened again. Being new to Atlanta, I knew none of the history of the Film Forum, but it was a cool little theater.

George Ellis (“Bestoink Dooley”) was also a stage figure in Atlanta and a TV figure. I think he appeared on TV as Bestoink. I saw him in a Jim Peck play called “Sterioptican,” which had in it one of my favorite lines ever: “Let’s make the humdrum optional.” My first memory of Ellis was when he opened what I believe was his first movie theater, a very small place in back of the downtown YMCA on Spring Street. From there he moved to Ansley Mall, et cetera. I went to his first movie theater on opening night. He offered us a refund (which we refused) because the theater had just that afternoon been treated with fire retardant and the smell of ammonia was almost overwhelming. But we toughed it out. The film was a black and white sub-titled movie about the Spanish Civil War. It was terrific. And he served coffee with whipped cream in the lobby.

Here is a link to a newspaper article about the episode I described in my first comment involving George Ellis getting locked out. I was under the impression that Lewis Osteen, the guy who did this, was the GM of the chain. The article indicates that Osteen had purchased the mini cinema chain from it founders. I never cared for Osteen but thought Gentry and Maddox, the founders of the company, were good people to work for. I was suprised that this event ever took place.

The article clears this up since it seems that Osteen was not a hired gun working for the owners, but was the actual owner. During the Osteen years I would sometimes go to the film depot but come back empty handed because there was a COD tag on the print and Osteen had not paid the up front money or the rent from a previous booking.

As far as I can recall this theater stayed open til 1990. I remember the AJC having an article saying that a high point in Atlanta (the Ansley Cinema) movie going and a low point (the Rialto) both closed around the same time in 1990.

I saw the movie “Parting Glances” there which, according to IMDB was released in February, 1986. When Big Star Supermarket next door expanded, they took out the old Music City record store and part of the theater. Then, Morrison’s Cafeteria was rebuilt/redesigned and that took out the other side of the theater.

To the best of my knowledge, this theater lasted into the early 1990s. I do remember the Lily Tomlin, Bette Middler file Big Business playing there. This was a 1988 film. George Lafont enlarged the lobby to a coffee shop. It did seem like a very small theater when it was open.

Thanks for the update. My memory is refreshed and your facts appear correct. They also support my sense that I worked my day for George Ellis later than 1976, around 1980.

I have another Ansley Mall MiniCinema memory. This would have occurred in 1970, shortly after I turned 18. I attended a first-run screening of “Trader Hornee,” an X-rated spoof of the MGM classic, complete with stock footage, as I recall. The movie was extremely lame and was filled with simulated sex. Nevertheless, it was X-rated and I definitely had the sense none of us in the audience should have been there.

When I exited the auditorium at the end of the movie, two of the righteous youth ministers from my church were working their dates on the last row.

What an outrage! Not only do you contradict me, but you have the nerve to be right. Further research reveals that at some unknown point during the late 70’s, George Ellis moved his operation from Ansley Mall to the 350 seat Fine Art / Garden Hills where the proceeds from the Rocky Horror Picture could better subsidize his art film operation. Later he moved back to Ansley Mall and the Rocky Horror Show moved down the street to Lefonts Silver Screen.

In 1982, Ellis exited the theatre business. Control of the Ansley Mall facility reverted to the mall owner. Lefont stepped in and operated the FF for about five years. In 1987 he sold his interests, except for the Screening Room apparently, to Hoyt. Hoyt in turn closed the FF the day they took over. Evidently they felt the costs of renovating the site were not worth the return on such a small venue. So, in total, the Ansley Mall Mini Cinema had a lifespan of about 20 years, a little longer and much more interesting than average for the class of suburban theatres built during the late 60’s to early 70’s.

Nope, the theatre staggered on until, at least, 1985, when film historian Frank Thompson and I attended a screening of Alan Rudolph’s “Trouble in Mind.” That may or may not have been the final movie I saw in the place, but it was shuttered soon thereafter.

If my memory serves, George Lafont operated the Film Forum in its final years. In the end, I fuzzily recall an adjacent store acquired the theatre for retail space.

Here are three distinct memories of the location.

I saw a double feature of “You Can’t Cheat an Honest Man” and “My Little Chickadee” from new 35mm prints. Those began my lifelong obsession with Fields, so it’s no wonder I returned on opening night for the next program of “The Bank Dick” and “Never Give a Sucker an Even Break.” It was New Year’s Eve. Every seat was filled. There were two film breaks during the opening titles of “The Bank Dick.” I was in a panic I would not get to see the movie.

I had even arrived at the theatre before the management’s last minute appearance on the premises. I remember I was worried the shows had been cancelled. The movies did run and the crowd was very enthusiastic. What a great week in my life.

Until Lenox started sticking theatres in its lobbies, this was the smallest place I ever saw a movie in. Of course, at 171 seats it would be a midsized moveover house in the megaplex of today. I do not know exactly when this place was built, but the Sandy Springs Mini Cinema was opened in December of 1968, so it was before that. With its small capacity, it did not play much mainstream first run product, but was what we would call an “art” house today. George Ellis took it over and renamed it the Film Forum in May 1971. His choice of product was so obscure that for weeks his newspaper ad was included in the section reserved for the 16 and 35MM softcore porno houses of the day.

My first visit was in October of 1971 for “Oh What A Lovely War.” (This film first played at the Peachtree Art at Peachtree and 14th, but by that time that neighborhood had become pretty rough. The Peachtree Art closed soon after and reopened in the summer of 1970 as the Weis Cinema with “Catch 22.”) Film Forum was not a good place to see a movie, but it usually played films that you would see offered no where else. There was a center aisle with two section seating. Although not very big, the screen was wall to wall which meant that it was located high enough to have the exit doors underneath. The theatre was located in a narrow storefront of a strip shopping center, despite its Ansley MALL name. The lobby was also very small and the whole place had a warehouse look to it. However, the audience to this theatre did not seem to mind and the place did great business for years.

In fact, the business was so good that it led to one of the more disgraceful episodes that I have ever witnessed in my days working in Atlanta area theatres, and that is really saying something. Apparently, the FF, despite being operated and managed by Ellis, still retained some type of connection to the Mini Cinema company. It could be that George was just a sub lessee. At any rate, the Mini Cinema chain was by this time in very poor shape and the absentee owners had placed the entire business in the hands of a hired gun who will remain nameless here. Since the FF was doing more business than all of the other Mini Cinemas combined and could supply some desperately needed cash, this guy, after a careful reading of the agreement, “reacquired” control of the Ansley Mall Mini Cinema, and did it in the dark of night.

The first George knew of this development was the next day when he showed up and found that his key no longer fit the locks. Mr. Mini Cinema soon found out that there was more to the success of the FF than just booking the right films. Since George knew most of his customers by sight if not by name, it did not take long for word of what had happened to get around. Needless to say, business dropped off to about 1% of normal, and before long George was back in control with a new ironclad lease agreement. This incident took place in about 1975, and was shortly before Weis acquired the Mini Cinema chain. Before much longer, and possibly because of the aquisition, the Ansley Mall location closed up. Ellis tried to keep his business going, and at different times operated the Capri (now Buckhead Roxy) and Fine Art (now Lefont Garden Hills) sometimes under the name of Cinema Gallery.