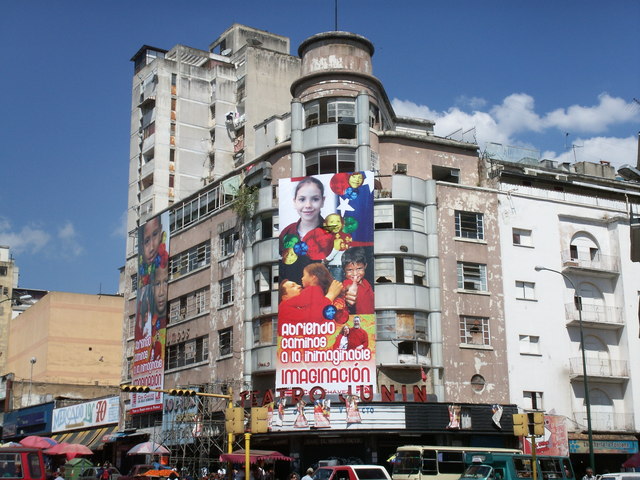 Located at Plaza O'Leary on the corner of Avenida Sur 8 and Avenida Oeste 6 at Aserradero Esquina in the central area of down-town Caracas known as El Silencio. The Teatro Junin is a magnificent structure.

It was opened on 21st July 1950 with Walt Disney’s animation movie “Cinderella”. Designed in an Art Deco style by the famous and prolific North American theatre architect John Eberson, the exterior of the building towers six stories high over the corner entrance and consists of three columns which contain gently curved windows on each floor within the building. The neon-lit name ‘Teatro Junin’ is mounted on the large marquee which curves around above the entrance doors. At night the entire facade was originally outlined in neon lighting.

The foyer is circular and on the left hand side there is a sweeping staicase which leads to the balcony foyer containing an open balcony overlooking the main foyer below. The stairwell and balcony railings have wrought-iron Art Deco style supports and the entire space was originally illuminated by concealed lighting in troughs that swirled and curved around the circular space.

In the auditorium seating was provided for 714 in the stalls and 504 in the balcony. The proscenium opening is squared and was set back into an anti-proscenium which had a curved moulded canopy on top and two ‘false’ side boxes on the walls. The cinema was equipped with an organ (make and style currently unknown) which was opened by Steve Weltner.

I have no date of closure, but when viewed in April 2006, the building was closed up and semi-derelict with broken windows etc, indicating it had been in this condition for possibly several years. If there is a such a thing as Listings for historic buildings in Venezuela, then the Teatro Junin would be a major contender for consideration.

The Teatro Junin was restored and re-opened in 2015.

Here are a couple of recent photographs of the Teatro Junin:
http://flickr.com/photos/kencta/130122224/

Sadly, this John Eberson designed theatre is currently being gutted in July 2008:
http://www.flickr.com/photos/ajoffre/2665651993/