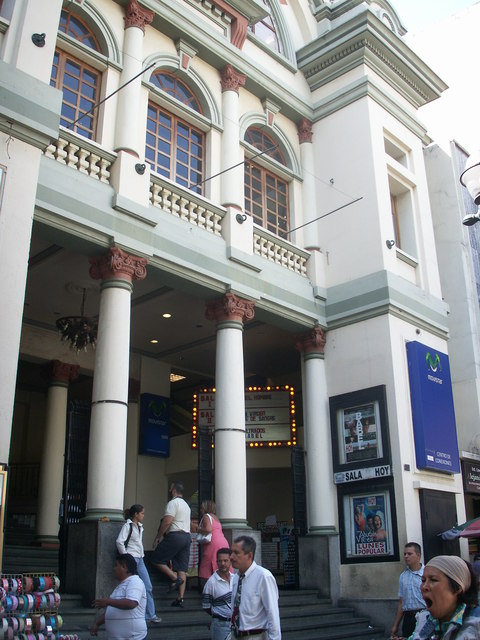 The Teatro Ayacucho is located on Avenue Sur 4 in the East of Plaza Capitolio which is in the Central district of Caracas. It was the first ‘movie palace’ to be built in the city and opened on 19th December 1925 Mae Murray in “La Mujer que Peco” (“A Woman Who Sinned”) plus vaudeville on stage with Gloria Gil Rey.

It was designed by architect Alejandro Chataing, who in 1919 had designed the Nuevo Circo (a bullring) in the city. At the Ayacucho the style was Baroque with a magnificent facade which was topped by a rounded pediment that had the theatre name enscribed in the cement. The entrance was up a wide stairway which had Corinthian pillars set in the centre of the steps.

Seating was provided for 800 in the stalls, 100 in the rear stalls, 250 in the front balcony and 450 in the gallery(rear balcony). There was a large stage and three floors of dressing rooms for artistes.

Among the stars who attended the cinema in its early days were Rodolpho Valentino, his mistress Pola Negri and Mae Murray who came to visit the cinema in August 1926.

Today the main auditorium has been converted into a shopping center with restaurant areas. There are still traces of the original decorative detail remaining which includes the decorative plaster on the front of the front balcony and light fittings adjacent to the proscenium opening. The two screens that now operate in the building are located in the former gallery (rear balcony).

The Teatro Ayacucho is located between Esq. La Bolsa & Esq. Pardre Sierra at Catedral on the Avinida Sur 4.