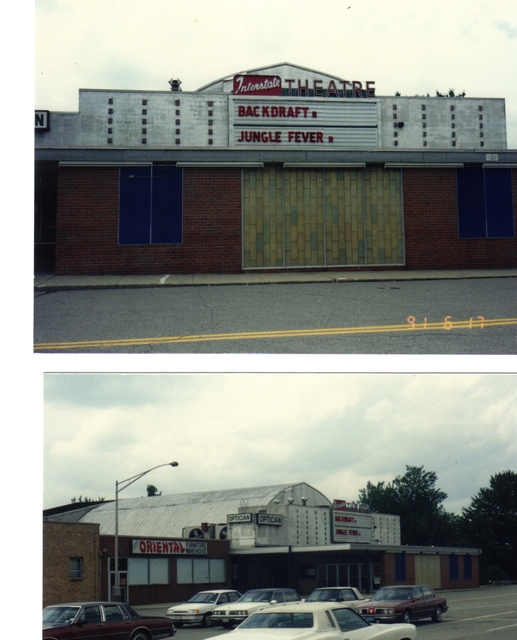 The interstate Theatre was opened by Associated Independent Theatres Inc. chain on August 14, 1964 with Jerry Lewis in “The Patsy”. It was twinned on November 17, 1978.

It is, the theater was also known as Sony Theatres (it was opened by Music Makers). I saw one movie there late in its run but remember the fight (by the bowlers of the community) to keep Interstate Lanes open. The bowling alley was actually well run and successful, why the devoloper knocked it down I don’t know (I guess Boarders and Bed Bath and Beyond yeild more rent revenue). I saw Air Force One at the Interstate. I remember the lack of computerized ticketing and the large but simple theaters (painted purple I think). Interstate and Edgewater had slightly lower ticket prices than other Loews/Sony Theatres in Northern NJ (as they were older and didn’t offer the digital sound and extra padded seats that the younger Loews locations did).

The Plaza Theatre was, best to my recollection, originally built as part of a small chain of theatres by a company called A.I.T. I can still â€œseeâ€ the logo on the marquee when I saw THUNDERBALL there in 1965. It changed hands until the Music Makers Theatre circuit bought it. Music Makers was founded by composer Mitch Leigh (Man of La Mancha, and the jingle â€œNobody Doesnâ€™t Like Sara Leeâ€) in 1957 as a music and radio commercial production house. The Music Makers chain was comprised of acquiring single theatres and small chains throughout NY, NJ and DE. It also built new houses, one of which is not listed in Cinema Treasures (I have to fix that). I worked for this chain (1974-75) and there’s simply not enough room here to go into grand details. An interesting aside is that MM shrewdly owned the wholesale company that supplied the candy, soda and popcorn for all their theatres. A brilliant move in maximizing the profit stream. It was called the Andy Candy Company and managed by a very nice guy named Dan Frank for many years. I was told that â€œAndyâ€ was Leighâ€™s son. It was, though, during this period that the company expanded pretty quickly as we were adding new screens and twining large single houses â€¦ the first of which was the Brick Plaza Theatre, Bricktown (long gone). The Plaza in Hazlet had a â€œtwin sisterâ€ 55 miles away, the Interstate Theatre in Ramsey, NJ (also gone). Lobbies were laid out differently, but the auditoriums were identical. I remember laying new linoleum tiles around the candy stand in 1975! Music Makers was also diversifying into new areas. If youâ€™re from central NJ and remember the â€œChicken Skilletâ€ fast food restaurants, they were owned by Music Makers. I know of at least one structure that still exists in Eatontown on Route 35. Another was located in Neptune. â€œChicken Skilletâ€ never caught on, though. The company also owned Sunny Day coin-op laundry on Rte 9 in Howell. The MM folks were good people and if you showed an interest in their interests, it was recognized. The companyâ€™s booker was David Tuckerman, an incredibly smart man with a clever sense of humor, who later became head of theatrical distribution at New Line Cinema. Milton Herson, (such class, extremely smart) was the president. Locally, the Plaza was managed by Lillian Pyburn for many, many years. A genuinely wonderful woman.

Just realized I misspoke above when stating,“If youâ€™re from central NJ and remember the â€œChicken Skilletâ€ fast food restaurants, they were owned by Music Makers. I know of at least one structure that still exists in Eatontown on Route 35.” This is incorrect, no structure survives.

Have been out of the area for quite some time and just found out the movie theatre in Interstate Shopping Center in Ramsey, NJ is no longer in existence. How sad. As a youth spent much time there with dear friends and saw many, many great movies. Just noticed the above post was written on April 25th. Date is significant to me because that is the date I got my first kiss and it was at the movies!! Memories…

I worked at this theater as a high school kid in 1993. The manager’s name was Mike, who usually had a mustache and was a smart guy, getting his masters in accounting or finance at the time. Mike intentionally ran the theater clocks a few minutes fast in an effort to get people moving into and out of the theater faster. Once or twice someone would have an issue and demand a refund because they walked into the theater on-time but the film had already begun lol. I usually worked the candy counter, and we didn’t have a cash register; we had just a money box and a calculator, which seemed pretty olden in the 1990s. We would count popcorn bins and soda cups at night’s end and had to be within a couple dollars of what our take said we sold. We had a good group of people working there, and even though I only worked there for eight months, many memories have stayed with me. Great community movie theater.

Saw several movies here, late 70’s until I went to college in 1983. One was “The Fish That Saved Pittsburgh.” Really bad movie. The theater was unremarkable archictecturally and run down.

I understand Music Makers had other interests besides cinemas. They also had their own record label in the early 60’s, but none of their releases were big hits and the label soon folded.

This became a twin cinema on November 17th, 1978. Another grand opening ad posted.