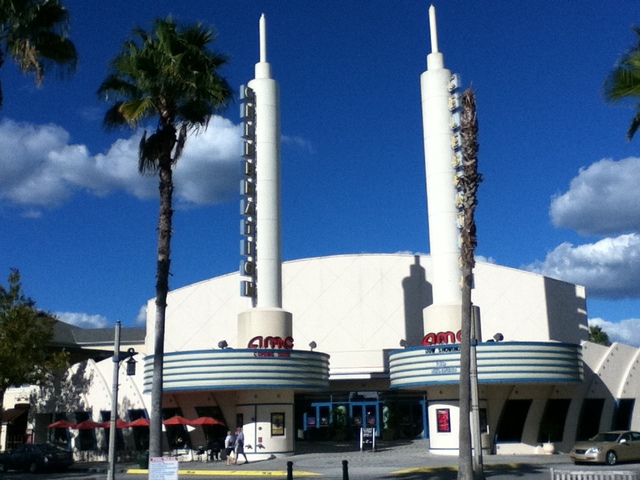 Opened October 25, 1996. Designed by noted modernist architect Cesar Pelli, the Celebration Town Cinema was immediately labeled by architectural pundits as an example of the Googie style of architecture. It is in fact a post-modern interpretation of the Art Moderne style of the 1930’s-1950’s.

Its two thin, round spires rising above the twin, rounded marquees that flank the theatre’s entrance are a landmark in this planned community built by the Walt Disney Company as an adjunct to Disney World in Orlando, Florida.

The day the signs came down

This is a beautiful and architecturally significant building but with only two screens it does represent a challenge on how to keep it running as a cinema. Since Orlando does not have dedicated venue for independent and foreign films the Celebration could possibly fill this void.

….the Enzian is Orlando’s dedicated venue for independent and foreign films, along with a screen or two down the street from them at Regal Winter Park Village.

Still sitting vacant with a high lease that no one wants to deal with for such a small profit margin. I assume that once AMC’s obligation to operate this location and subsidize profits from other locations they bailed!

As an interested theatre manager working in the area ,I inquired about its availabilty recently. It still is vacant but is also still part of AMC-couldn’t get any further information than that.

It was sad to see this place close. I always thought the theater brought a closeness to the Celebration Community.

This opened on October 25th, 1996. Its grand opening ad can be found in the photo section.

Ironically AMC if they still own the building could reopen it as a AMC Classic Theater or just sell it off to New Vision Theaters who took over most of the locations divested by order of the DOJ to acquire Carmike. I would guess that AMC took the management contract when Disney built the town as they owned the other theater in disney’s Reedy Creek Improvement District in Lake Buena Vista, FL. the town was put in a different county but having a Vintage style Twin when in driving distance is a 24 screen operated by the same company tht must have caused internal cannibalization with it’s older sister. it would just market better as a Budget Theater and if AMC does not want to sell it running it as a AMC Classic would bring in more bodies as the ticket prices would be cheaper and locals would get the Theater day camp program the classic’s run.

AMCs lease ends in October of 2021. A local group, Front Porch Theater Inc., is trying to bring back this location as a Dine-In Stage and Screen venue. The whole town would love for this location to be up and running again.