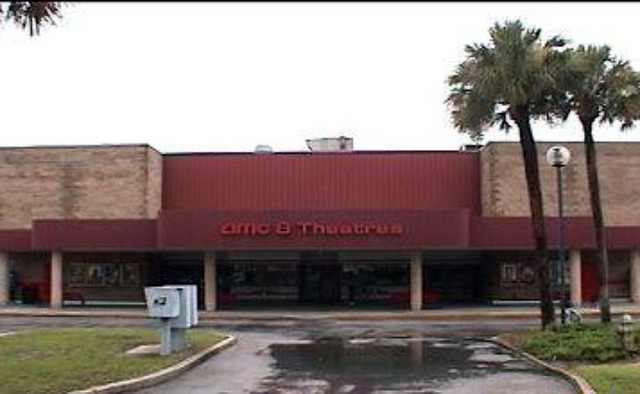 This was a typical 1980s multiplex. I’ve never been inside, but the building is now the “Summit Church”. Recently, the interior was renovated, and I did a bit of dumpster diving. Rows of theater seats were in there, but nothing worth taking. It was all rather waterlogged from rain, and they were not handled gently, there were lots of dents and bends. In retrospect though, I regret not snagging a row.

I also remember this theater from having been used as a shooting location in the movie “Parenthood” with Steve Martin. Shortly after I moved to the Orlando area in 1998, I won free tickets on the radio for an advance showing of “The Mummy” that we saw in this theater. It was a very typical boxy multiplex, but the type that I saw SO many great movies in in the 80’s and 90’s. Despite it’s “grit” so to speak and lack of character, theaters that I used to go to of this type have special memories for me.

This was the standard design of just about every eightplex AMC built during the 1980s. from The Northlake 8 in Tucker, GA was identical to the Fashion Village.

I also remembered when they started playing Rocky Horror Picture Show. The assistant manager, who mostly described as a b***h, would turn on the lights if anyone tried to act out the show That didn’t stop us, we got a live cast running and it ran for a while. It was fun to do the pre-show, we would get so many sailors from the training center and we always loved to joke, “Don’t you just love a virgin in white.” People who had never seen the movie in a theater are called virgins.

I remember being hired before this theater opened. We did a group tour and the seats had not been put in yet. It was fun opening the place up and competing with the fashion square theater that used to be a stand alone building across the street. I remember changing the marquee outside and never having enough letters. Helping splice film back together when it would break during a movie. Sneaking friends in the side doors(until they installed an alarm system), the long lines around the building when a big movie came out. the RHPS being cancelled because they damaged the screen too many times. Lots of cool people worked their. Funny to think of it being a church now with some of the antics that went on their with the young staff.

This opened on August 15th, 1986. Grand opening ad in the photo section.