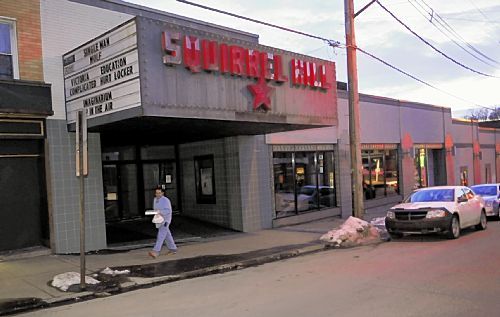 Opened by Warner Bros Circuit Management Co. on February 2, 1937 with George Brent in “God’s Country and the Woman”. The Squirrel Hill Theatre was one of the last of the dying breed of neighborhood movie theatres.

Last operated by CineMagic, screening first run and independent films, it was closed on March 30, 2010. The theatre was demolished in May 2021.

“I’m not sure why there is a preservation effort underway when the space where the theater sits is scheduled to be part of the redevelopment effort.”

It’s because some of us don’t like AMC and still appreciate the fare that smaller theatres like this, the Manor, and the Regent Square show. Besides, this country has gotten too over condo-ized and small businesses like these theatres provide welcome relief.

You are right though. They could have done a better job on the remodeling. There are independent cinemas that still hold their own against the big chains.

Back in high school I made regular Pittsburgh movie pilgrimages from Youngstown, and saw some classics at the Squirrel Hill: “Cries and Whispers” (April 1973); “Day for Night” (New Year’s Day 1974); “A Brief Vacation” (Memorial Day 1975); “One Flew Over the Cuckoo’s Nest” (Dec. ‘75); etc.
The theater had a very sophisticated, big city feel (similar to some NYC theaters of the time like the Coronet, Sutton and Paris), and I vaguely remember a nearby restaurant that we would go to while in Squirrel Hill (Poli’s maybe?) Great memories.

I only saw one film at this theater. I loved the setup and the neighborhood atmosphere but the presentation was terrible. Picture quality was extremely poor, the print was scratched, and an amp was blown. Sad to hear it closed, with some improvements it could have been very nice.

I remember when “Becket” opened here in mid-1964. It kept playing into the fall until I believe they had to just stop it, despite its success, because they had to do a renovation to prepare for the roadshow of “My Fair Lady.” This renovation allowed them to concentrate on more roadshows such as “Doctor Zhivago,” “The Agony and the Ecstasy,” and “The Lion in Winter.” It was designed with gold curtains and gold walls. I don’t remember the color of the seats and carpets. It was a smaller theater in comparison to the downtown ones.

Whatever happened to this place? Was it ever demolished?

Early this year plans were afoot to turn the Squirrel Hill Theatre into a live music venue, but they never cane to fruition. Then on June 29 the Pittsburgh Patch web site posted a brief article leading with this news:

“Redevelopment plans for the old Squirrel Hill Theater site have advanced, with the site being sold and the building expected to be demolished soon for a new $27 million mixed-use development.

“A subsidiary of Action Housing and Brandywine Agency, partners in the redevelopment effort, has officially purchased the property. The sale clears the way for Flats on Forward, a six-story building that will have 24,000 square feet of office space, 42 apartments and first-floor retail space.”I’ve found nothing more recent about the redevelopment project, so it’s possible that the theater building is still standing, though if so it probably won’t be for long.

Some years ago the late rapper Mac Miller, who had once lived in the neighborhood, considered buying the theater for use as a live performance venue, but that plan too failed to materialize. The growing popularity of the neighborhood has probably made the site too valuable for theatrical use.

The building has been demolished.