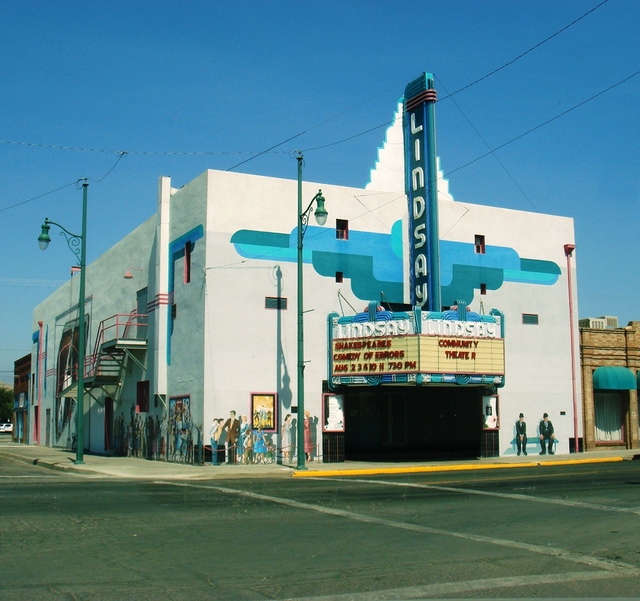 One of the theatres in Lindsay was built in 1933, to replace an earlier theatre on the site which had burned. According to an article in Southwest Builder & Contractor of April 28, 1933, the architect of the new building was Albert Schroepfer of San Francisco. No address was given for the theatre, though.

Whether the theatre in the article was this one or the Grove, down the street, is moot, but I’m leaning toward this one, as this photograph of the Grove shows a side wall that looks as though it was built of concrete block, which would suggest a more recent date of construction than 1933- perhaps the 1950’s, when concrete block construction became quite common. Also, the offset entrance and the angled marquee have a very 1950’s look.

The Lindsay Community Theatre, despite recent renovations, simply looks like an older building, of the sort that would have been built in the 1930’s, with a centered entrance, tile trim, and a balcony. If someone could find the opening date of either or both theatres, we could be certain which was which.

Here’s a 2006 view of the LINDSAY: http://www.boxsetgallery.com/stein/index2.html

The theater that burned may have been the Glade. An article in the LA Times dated 9/7/30 discussed the sale of the Glade to the Wobber Brothers of San Francisco, who had been renting the theater for some time.

The L.A. Library’s California Index has a few other references to the Glade Theatre. The L.A. Times of March 30, 1924, said that a pipe organ was being installed there. The August 4, 1929, Times said that improvements were being made to the Glade Theater. Motion Picture Herald of January 2, 1932, said that the Glade had been sold to J.L. Seiter and William Gustine.

Another reference may or may not concern the Glade. The Rounder, September 23, 1911, said that a new theater was to be built in Lindsay.

The earliest reference to the Lindsay Theatre I’ve found so far is in the July 4, 1942, issue of Boxoffice, which mentions an advertising campaign. It says that the manager at that time was named Harry Stark.

However, the Glade Theatre at Lindsay is listed in an ad for the Pacific Coast Theatre Supply Company in the August 13, 1938, issue of Boxoffice. It was a list of theaters in the area which had installed Floating Comfort Theatre Chairs made by the International Seat Corporation. No temporal overlap between the names increases the likelihood that the rebuilt Glade and the Lindsay were the same theater.