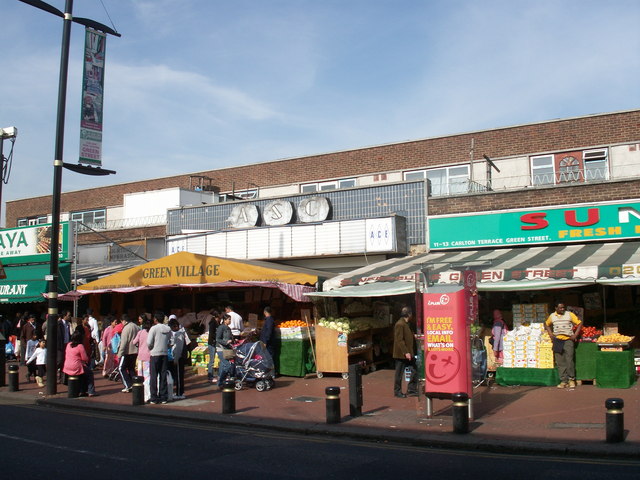 Located in the east London district of Upton Park. The Carlton Cinema was a project of exhibitors Clavering & Rose who employed noted cinema architect George Coles to convert the old St. George’s Industrial School building into the auditorium of the new cinema. The outer walls, now with original windows and doors bricked up were retained and a splendid new facade in an Egyptian style was built on Green Street. It was faced in multi-coloured tiles manufactured by the Hathern Station Brick & Terra Cotta Company (similar to the George Coles designed Egyptian style Carlton Cinema, Islington also built for the Clavering and Rose circuit). Inside the entrance led to a long connecting corridor which contained a cafe, and through this into the auditorium, which was set well back from and parallel to Green Street.

Inside the auditorium, seating was provided for 2,117 in a semi-stadium plan, (a raised area at the rear, but with no overhanging balcony). The Carlton Cinema was equipped with a Compton 2Manual/8Rank theatre organ which was located on the left hand side of the orchestra pit. It had a 30 feet deep stage for variety acts, the proscenium was 44 feet wide and there were six dressing rooms. The throw from the projection box to the screen was 161 feet, said to be the longest in Britain at that time. There was a long parade of shops located on each side of the main entrance.

The Carlton Cinema opened on 29th October 1928 with the Fritz Lang film “The Spy” (Spione) starring Willy Fritsch. In February 1935 it was taken over by Associated British Cinemas (ABC) and minor improvements were made, one of which was moving the Compton organ to the centre of the orchestra pit and placing it on a lift. The Carlton Cinema was slightly bomb damaged in September 1940 and again in September 1944 which forced it to be closed briefly on each occassion. On 27th January 1945, a V2 rocket totally destroyed the Egyptian facade, the foyer and some of the adjacent shop units and the cinema was closed permanently. The programme playing that week was James Ellison in “Lady Let’s Dance” and Eric Fullerton in “Western Approaches”.

It lay derelict until post-war building restrictions were lifted and ABC house architect C. ‘Jack’ Foster designed a new ‘modern’ facade and foyer which had a row of flats built on-top. He also restored the remainder of the building which re-opened on 10th August 1953 with Alec Guinness in “The Captain’s Paradise”. Seating had now been reduced to 1,755 and there were now only four dressing rooms.

From 17th September 1961 the Carlton Cinema was re-named ABC Upton Park. From 1978 it was leased out to the small independent circuit Alternative Cinema Entertainments Ltd. and was re-named ACE.

The ACE closed on 23rd March 1983 with Mel Gibson in “Mad Max” and “Mad Max II” and it was reported that it was going to converted into a triple screen cinema. This never materialised and the building quickly became a target for vandals who started several fires and damaged the auditorium. Eventually the auditorium was sealed off and remained derelict, whilst the foyer became a Superfresh supermarket.

The auditorium was demolished in August 1996 and the land became an open car parking space. The 1953 re-built entrance and foyer remain in use as a grocery store (current Green Village) and the marquee still has the ABC ‘lozenge’ sign (with ASC painted on) and the name ACE on each end. On the outer wings of the facade are the original shop units which survived the war, still decorated with their creme Hathern terra cotta tiles.

A vintage 1928 photograph of the original facade of the Carlton Cinema:
http://flickr.com/photos/kencta/137554717/

There is a misprint in the main article. The building was faced with Hathernware (not Harthenware), made by the Hathern Station Brick & Terra Cotta Company of Loughborough, who supplied similar tiling to dozens of cinemas up and down the country. The material was actually faience, or glazed terra cotta. In later years the company specialised in restoring terra cotta work on buildings as diverse as Harrods and Hampton Court Palace.

I lived just up the road from here when i first moved to London in the early 80s. The first of a few movies i saw here was ‘Quest For Fire’. I remember the main entrance hallway was huge and went back for a great distance. I swear i remember entering the auditorium and being totaly overwhelmed by the shear size of it- cavourous id say. Very wide and deep with a stadium style circle area. One thing i remember well is how badly lit it was. On future visits i then noticed that the auditorium was in a very very bad state of disrepair. I think i saw about 6 or 7 movies there and on on about half of those i was the only person there. Ken i know you state the capacity above as 1755 but im very sure it was a great deal more. Ive worked in many theatres in the West End and around the country and have a good sense on seating capacity numbers- i was thinking more along the lines of 2000 plus! Of course im very trust worthy of your info Mr.Roe

Ian;Thanks for trusting me! As I state in the opening text, ‘seating was provided for 2,117 in a stadium plan’. The 1,755 seating figure was at the end of its life.

im onmy knees!!!!! I missed reading that statement before blabbing on sorry!!!

A set of photographs of the ABC Upton Park:
View link
A photograph of the former ACE, now in retail use:
http://www.moviebunker.com/ace_green_street.htm

Here is a rare colour promotional photograph from the Hathern Station Brick & Terra Cotta Company Ltd. It is used by kind permission of Clive Greathurst.

It is the same as the b&w photograph that I posted above on April 30, 2006. I believe the colours are pretty well true to life, as the still existing exterior of the Carlton (ABC) Islington is similar. Both buildings share the same architect and same Hathernware terra cotta tiles manufacturer.