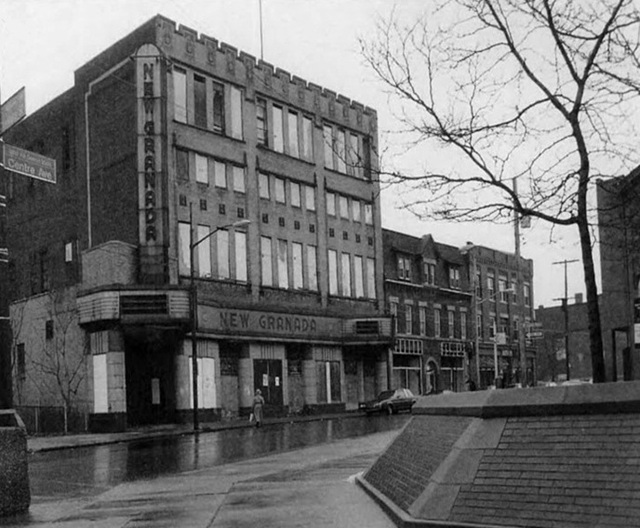 This historic theater in Pittsburgh’s Hill District section was built 1928. Used as a movie theater as well as a jazz club.

The building still sits abandonded. Community leaders are looking to save the theater and restore it.

Greetings! The New Granada Theatre Committee is currently trying to raise $2M to stabilize the structure which would include a new roof, masonry work, cleanout of the interior, new windows and other work that would get the building in warehouse form. The second phase will include community planning, visioning etc and then of course full build out. We have no idea what that will cost! It is a huge space that was once a skating rink, ballroom (Savoy), 1,500 seat movie theater, car show palace, basketball court and full gymnasium etc. There are three huge floors with amazingly high ceilings and a basement. The most recent structural analysis says that it is stable and can be revitalize, but that we would probably loose the building if it is not done within a decade. If anyone is interested is supporting this cause, please post a message here. We need your help. $700K raised, $1.3M to go for stabilization!

MLM— I can’t contribute much, though I would like to give something. This theatre is truly one of my favorites.

A related story— I hung the photo I posted above in an art show I was in a earlier this year, the curator loved the photo so much that I gave it to her to hang in her gallery.

MLM- do you have a website so I can spread the word?

Here is a 1947 photo showing the vertical. It would appear that the theater may have received a moderne style make over sometime in the late 1930’s.
View link

I have indications the theater is at 1909 Center (as listed above by Rick Aubrey) and 2009-13 Centre. Can anyone corroborate either? News stories and columns routinely ignore the address.

The structure opened in 1927 as the Pythian Temple of the Knights of Pythias. In the 1930s the building was sold to the owner of a nearby Hill District moviehouse called the Granada. He renamed the temple the New Granada. It had 850 or 920 seats, depending on one’s source.

The film house was owned by Associated Theatres in the 1960s (perhaps earlier, too) and early 1970s, but instead of including it the daily newspaper directory with other Associated theaters, the New Granada’s daily ad was listed alphabetically in the directory of Pittsburgh’s independent neighborhood theaters.

The New Grenada outlasted the Hill’s other longest-standing moviehouse, the Roosevelt at 1822 Centre.

In the New Grenada’s final years, it was open three days a week – not Fridays through Sundays, as you might expect, but Saturdays through Mondays. The owners had found attendance was weak on Fridays but felt they needed a three-day “weekend” for booking movies.

Given that it has been closed, deteriorating inside and out and, sadly, an eyesore for more than three decades (even longer if you consider how it was run into the ground during its last several years of operation), the New Granada has almost surely set the local record as the theater to remain erect the longest without being razed or used for any other commercial purpose.

Better it should linger in limbo than be sacrificed like hundreds of other Pittsburgh moviehouses.

Thanks Ed for the informative update.

Here is another photo:
http://tinyurl.com/ctlcln

“The 35,000-square-foot building, which is owned by the Hill District Community Development Corporation, has been the site of recent preservation efforts totaling close to $1 million. Within the last 18 months, the interiors were gutted, the exteriors was stabilized and a new roof was installed. A full renovation and build-out would cost between $9 and $11 million, says Dan Holland with [the Young Preservationists' Association].”