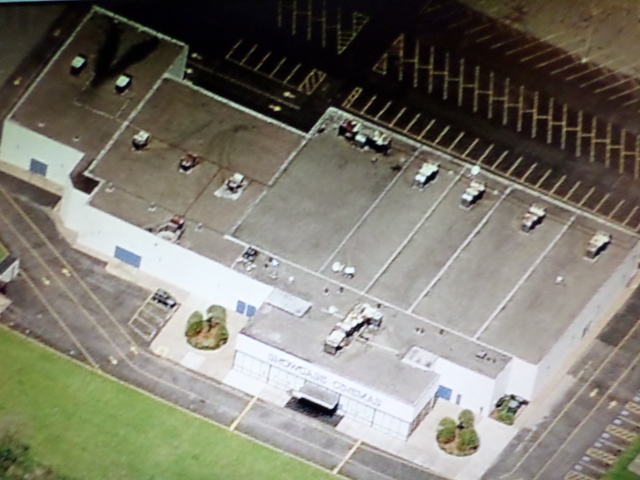 In 1999 owner National Amusements announced plans to tear down and rebuild the site as a sixteen-screen theater with stadium seating and a food court, but it never happened, and the theater remained the same.

Showcase Cinemas West, in Robinson Township, west of Pittsburgh, opened with an 800-seater, a 400-seater, a 375-seater and two 550-seaters.

When Sumner Redstone of National Amusements, Viacom, et al, was building this multiplex in 1977-78, he flew down from Dedham, Mass., for a day or two. Among other things, he met with a reporter or two. He already had opened Showcase Cinemas East in Wilkins and soon would build Showcase Cinemas North in McCandless.

I recall asking him about the oddity that all of the parking lot was either behind the large building (upwards of 90 percent of the parking) or on sides. Wouldn’t it have made more sense to allow the entrance to face the parking lot? After all the site was somewhat isolated back then anyway.

He explained that he would not have purchased and built on the property at all had he not been able to angle the front of the building, facade and all, in such a way that it could be seen “from that freeway.”

We don’t use the term freeway in Pittsburgh, but I knew he meant Route 60 (usually called the Parkway West), which is the link from Downtown Pittsburgh to the airport. The multiplex’s front can also be seen from Routes 22 and 30.

Ironically, back then, and even now, it’s a bit tricky to find one’s way from the parkway to the theater.

The grand opening ad is on this page at View link

And another one bites the dust — but not for about two weeks.

Showcase Cinemas West, bought by Rave Motion Pictures of Dallas late last year, will close after business April 15. Showcase Cinemas North, however, is in no danger of going dark.

Although it has been a fixture in Robinson for 32 years and boasts a visible perch above the highway, an easily accessible sea of parking and a dozen screens, Showcase West lost customers to the nearby 16-screen Cinemark at Settlers Ridge Center, also in Robinson.

Cinemark opened in October and appeared to deliver a knockout blow to Showcase, which lacked stadium seating and other now-standard amenities. Plans to renovate were announced years ago and then abandoned.

“The theater is just not grossing well. It has been the subject of a lot of competitive builds and it cannot sustain itself economically as a viable modern theater,” Jeremy Devine, vice president of marketing for Rave, said Thursday.

Managers and employees will be given “some type of severance package,” Mr. Devine said, and they were offered opportunities at Showcase North, but none apparently accepted. Many pleaded distance or scheduling problems or a reluctance to bump existing workers at the theater in McCandless.

Previous owner National Amusements of Dedham, Mass., which continued to operate Showcase West during this transition, had quit advertising in the Post-Gazette, leading some patrons to mistakenly assume the venue was closed.

Customers can use gift cards at Showcase West through April 15 or at Showcase North until Dec. 17. No money will be refunded.

News about Showcase West comes a month after the closing of the Squirrel Hill Theater, a neighborhood fixture for more than seven decades.

Mr. Devine couldn’t say what Rave will do with the sprawling property in Robinson. “We’ll continue to own that. I have to assume they’re looking at re-purposing that.”

Dan Tallon, chairman of the Robinson commissioners, said it was a shame to see Showcase go. “It’s been in Robinson for many, many years, and many Robinson residents have worked there,” he said Thursday.

But Mr. Tallon also said the closing, coupled with the opening of the Cinemark in the Settlers Ridge commercial development, is part of an ongoing business cycle in the bustling township.

But those spaces have filled back in, he said, and a new tenant is rumored to be coming to the former Giant Eagle building on Steubenville Pike, left vacant after the chain opened a Market District store in nearby Settlers Ridge.

“The shopping district is still expanding,” he said. “I’m sure someone will come along and do something with that space.”

Rave opened its first theater in 1999 and is known for state-of-the-art stadium seating and digital projection. With its buying spree at year’s end, it grew from 30 to about 65 theaters and 989 screens and, at the time, Mr. Devine said Rave would evaluate its new properties.

Moviegoers will see minor upgrades at Showcase North in a few months. A new sign will be installed in June, and plans call for more digital screens, an expansion of 3-D capability and a change in concession offerings.

For more information about the old and new owners or show times, see www.national-amusements.com or www.ravemotionpictures.com

Drove by today, such a shame, like so many other NA locations of it’s era, boarded upand sitting there.

Here’s the ad-slick for their grand opening:
View link

I drive past the Showcase West every day going to and from work. As of this morning, the building is, sad to say, half gone.

Was 301 Park Manor the actual address? Even when working at Showcase East, everything we had for West only listed it as Park Manor Drive with no address. This building was mostly a clone of the East location for those who were never there, however this one actually got a few upgrades over the years.