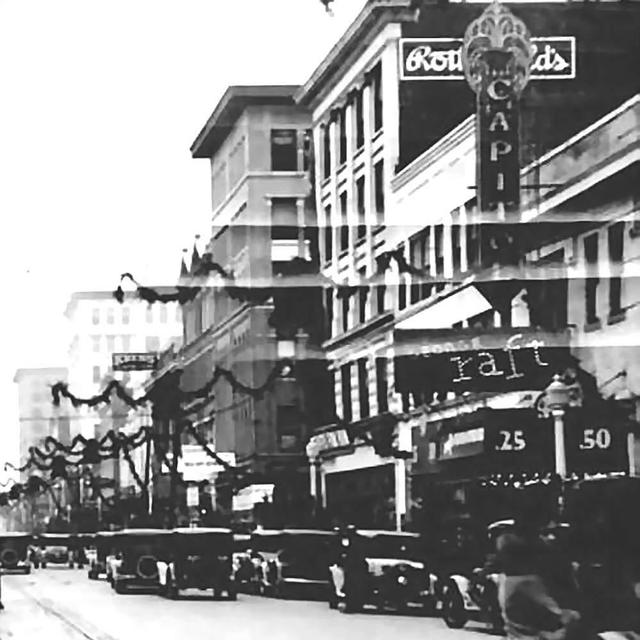 In 1906 Adolph Zukor opened Oklahoma City’s Dreamland Nickelodeon and Ballroom. This was before he teamed up with Jesse Lasky in 1912 to form Famous Players-Paramount.

By 1919 the Dreamland Theatre had switched over to Paramount features. At that time the massive upstairs ballroom was ripped out to expand balcony space, a flashy new marquee was installed, and the name changed to Capitol Theatre from March 13, 1921 when it reopened with Agnes Ayers in “Forbidden Fruit”.

Towering so high above Capitol Theatre’s facade the tall upright sign was actually a combination upright and roof sign.

Providing mood music during silent pictures the Capitol Theatre pit orchestra was the finest in Oklahoma City, and a separate Paramount Jazz Band performed on stage during intermissions. It was equipped with a Hope-Jone pipe organ.

After the Capitol Theatre closed, its expensive signage moved over to dress up Paramount’s southside Circle Theatre (1928-1982).

Check out the site below to view a 1917 photo of the Dreamland Nickelodeon.

A 1912 photo of the Capitol Theatre, when it was still known as Dreamland, can be seen on site below. Enter word ‘dreamland’, then hit search…
View link

Vintage images of the Capitol Theatre can be viewed on this site;
View link

From dougdawg comes this vintage shot of the Capitol Theatre. Later on a much taller blade sign replaced the one shown here, along with an eye catching marquee.
View link

Time lines for the Capitol Theatre can be traced on site below.
A 1912 view of the Main St shows this theatre under Dreamland, its original name.
In a 1925 photo the Capitol Theatre is going strong.
c1935 image the theatre has a new glass block Art Deco facelift, but already converted to retail space.
On this link type in “oklahoma city main street”. Look at photos of 1912 & 1935 300 block, 1925 Walker & Main, and 1947 Hudson & Main.
View link

Gentlemen, I hate to tell you this, but on Cosmo’s 03-27-11 post I entered Capitol Theatre’s exact address of “310 w main, oklahoma city” and came up with historic photos of when this was the Dreamland Theatre, and after its convertion to a Virginia Dare Shop. 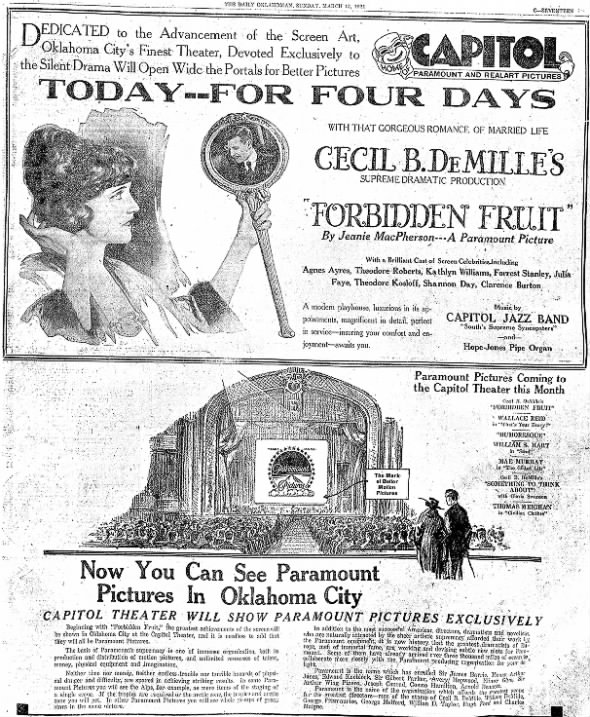